Massive protests disrupt Times Square celebration of hate and bigotry Broad coalition exposes Hindu nationalist front organizations in the US, and their agenda of normalizing human rights abuses in India

New. York , August 6 :The “Coalition to Stop Genocide in India”, a broad coalition of Indian Americans and US based civil rights organizations and activists today organized a massive rally at Times Square, in order to protest the celebration of the destruction of the Babri Mosque in India. The celebrations were organized by an entity that calls itself the American Indian Public Affairs Committee (AIPAC), a front for several Hindu nationalist (a.k.a. Hindutva supremacist) organizations in the US.

Protesters in large numbers held placards and chanted slogans to highlight massive human rights abuses in India, by India’s ruling Bharatiya Janata Party (BJP) led by Prime Minister Narendra Modi. For some who had gathered to celebrate the construction of the Ram Temple in India on the ruins of the Babri Mosque, the protests were a reminder that normalizing hate and bigotry would not go unchallenged in the US. The Babri Mosque was demolished by Hindutva supremacist forces in India in 1992, based on a campaign of hate, bigotry against the country’s Muslim minority and misinformation about the mosque’s origins. This is part of a larger and sustained campaign of historical revisionism that Hindutva relies on, in order to advance its virulent worldview.

The Babri Mosque was demolished by Hindu nationalist militias as part of a political campaign by the BJP party, where the leader of the party Advani led a rally to demolish the mosque. The campaign was accompanied by the killing of hundreds of Muslims across India, both before and after the demolition of the mosque. The site is now in control of Hindutva supremacist litigants, following a Supreme Court judgement that said the destruction of the historic structure was illegal but still handed over the site to those who carried out the criminal demolition.

“There is no doubt that Ram is a revered figure in Hinduism, and respect for all religions is part of our commitment to pluralism,” said Mr. Jawad Mohammed, General Secretary of the Indian American Muslim Council (IAMC). “However, people’s reverence for Ram has been manipulated in order to serve a vile and hateful agenda whose evil fruits are evident not only across India but now increasingly in the US as well,” added Mr. Mohammed.

“We learn in the Ramayana that Lord Rama’s birthplace is Ayodhya. However, our scripture does not specify where in Ayodhya Lord Rama was born. The reality is that the Ram Temple issue was leveraged by Hindutva forces to polarize Indian society in a destructive campaign that has resulted in untold human suffering and that continues to this day.”said Ms. Sunita Vishwanath, President of Hindus for Human Right.

It is alarming that an ideology that shows complete disregard for the value of human life, and the sanctity of all places of worship, is boasting of its evil deeds in India in the heart of New York City, which is so representative of our diversity and inclusiveness as Americans. 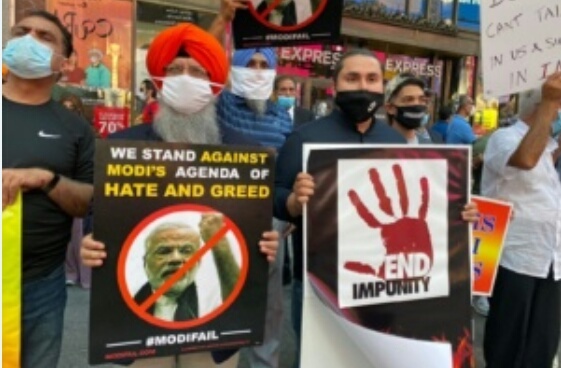 “Sadly, far-right extremists in both India and the United States have especially taken to demonizing and denigrating Muslims. I condemn any attack on an individual or group because of their faith and stand with my Muslim siblings here in my district and in India as they fight for dignity and human rights,” said New York City Councilmember Daniel Dromm. “I also thank all the Hindus and others who have taken a stand against dog-whistle propaganda cloaked as cultural celebrations,” added Mr. Dromm.

“Islamophobia has escalated to the level of ethnic cleansing in numerous countries, including India. From lynchings, to pogroms, to the cultural genocide exemplified by the establishment of a temple on the site of a demolished mosque, anti-Muslim bigotry is government policy in India,” said Mr. Nihad Awad National Executive Director of the Council on American Islamic Relations (CAIR). “The Muslim world and the international community must unite in opposition to the far-right Modi government before its fascist, Nazi-inspired ideology causes further damage to religious minorities,” Mr. Awad added.

Mr. Brad Lander, another New York City councilmember said, “We all have a responsibility for speaking out against Islamophobia, whether it comes from our country, or even our own community.” Mr. Lander further added, “As a New Yorker, and as a progressive Jew, I stand with our Muslim neighbors, here in NYC and those in Kashmir and throughout India who are facing nationalist and Islamophobic hatred and violence.”

“Political Hinduism is NOT a religious issue, it’s a class issue and final victory is possible by uniting the workers, peasants and the socially oppressed sections. Today’s protest in New York has brought various sections together to challenge the Hindutva project” said S. Karthikeyan of Ambedkar King Study Circle (AKSC).

“The celebration of Ram temple by the Hindutva brigade and its Indian-American followers is a celebration of power: the power to hate and hurt with impunity, to aggressively gloat over Indian Muslims and others who cherish our pluralistic society” said Ms. Ania of Coalition against Fascism in India (CAFI). “Choosing August 5 to celebrate is a new act of aggression against the Kashmiris. We reject this cynical use of religion to entrench hate and kill India democracy” added Ms. Ania.

The “Coalition to Stop Genocide in India” is committed to ensuring that American institutions and discourse are safeguarded from the virulent Hindutva ideology. To that end, the coalition will continue to expose Hindutva front organizations in the US and their role in normalizing the human rights abuses and religious freedom violations in India.