Syracuse, NY – The Pan African Community of Central New York (PACCNY) and the Syracuse Peace Council (SPC) expressed their solidarity with all of those standing up for their democratic rights by protesting racist violence and intensify the call for the demilitarization of this country at home and abroad. The two organizations, with support from Veterans for Peace Chapter 51 and Central New York Poor People’s Campaign held a rally on Wednesday, June 10 at 12 noon at Syracuse City Hall outlining their call to the leadership of Syracuse, Onondaga County, New York State and the federal government.

“The militarization of police officers encourages them to adopt a warrior mentality and think of the people they are supposed to serve as enemies,” as described in their collaborative statement. The organizations describe “the increased militarization of the police, coupled with the systemic racism that the U.S. is built on, as an incredibly dangerous and volatile mix.”

Charles Anderson, President of the Pan African Community of Central New York, says “this collaboration with the Syracuse Peace Council is a great opportunity to promote understanding among local communities, especially those that suffer from oppressive structures and systems.”  “Racism, an unjust economic system and militarism fuel each other, bringing the wars abroad home,” notes SPC staff organizer Carol Baum. “Similarly, those forces acting in concert at home manipulate US residents to support wars on black and brown people abroad.”

Julio Urrutia of the Syracuse Peace Council, addressed systemic issues stating,  “The systemic problem in the police department and the culture and mentality of creating warriors instead of protectors, has to change. That’s not going to come very easily, because there is a strong resistance by the police, particularly the police union, to any kind of reform.”

It was also made clear their demonstration demanding reform is not anti-police and that police unions maintain, “strong resistance”. Urrutia equated the situation with bad apples, in this case a bad orchard, “No, it’s more than a bad apple, it’s a bad system…….we have to redo the orchard”

Statement of Opposition to Military Action Against US Residents and the Militarization of the Police, and Condemn Police Murders

The Pan African Community of Central New York promotes and celebrates the efforts of people of African origin for self-assertion, human dignity and self-determination within an Internationalist vision. The Syracuse Peace Council is the oldest, local, autonomous peace and social justice organization in the United States. 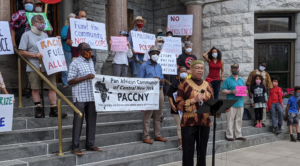 The Pan African Community of Central New York, the Syracuse Peace Council, Veterans for Peace, Central New York Poor People’s Campaign and Syracuse Democratic Socialists of America condemn the intensified militarization of U.S. society, in particular the use of the military and militarized police forces against civilians All organizations affirm the right of people to exercise their constitutional rights guaranteeing freedom of speech and the press, and the right to assemble and petition the government for a redress of grievances.

Since that brutal murder of George Floyd on May 25,  people have risen up in massive protests across the country, demanding justice and an end to racism. In response to these demands, the Trump Administration deployed the military against unarmed protesters in Washington, D.C., in order to “dominate the streets.” Mr. Trump followed up with threats to deploy the military to any city or state refusing to deal with protesters in a way he saw fit. Since then, soldiers from the 101st Airborne Division from Fort Bragg have been deployed and helicopters have been flown over demonstrators as a show of force.

While Mr. Trump has no legal basis under the Constitution for this increased militarization, he has sought to invoke the 1807 Insurrection Act, which governs the President’s ability to deploy the active-duty military within the U.S. to put down rebellion. The Act does not allow him to deploy the military in cases where the governors of the states refuse to request intervention – which most Governors (including New York State) have so far pointedly opposed. We want to be clear that Mr. Trump’s actions are setting the conditions for the abrogation of basic democratic rights. It is worth remembering that it was the same convergence of militarism, invasions, economic depression, racism, chauvinism and xenophobia that brought the fascists to power in Germany in 1933.

The increased militarization of the police, coupled with the systemic racism that the U.S. is built on, is an incredibly dangerous and volatile mix. George Floyd’s murder, was preceded by that of Breonna Taylor, a young Black woman who was shot and murdered by police in her home. Ahmaud Aubrey was murdered by white vigilantes while out jogging. There have been hundreds of murders of innocent black and brown people by police, some of whose names are now part of the history of the militarization of public spaces – Botham Jean, Treyvon Martin, Tamir Rice, Freddie Gray, Sandra Bland, Eric Garner. There has been little accountability for these killings.

We understand the link between the militarization of the streets and the handing out of trillions of dollars to the top 1%. The wars fought abroad are one component of the military management of the world system where the U.S. barons benefit from the militarization of the planet. It is not coincidental that under the National Defense Authorization Act  the rulers get to allocate to themselves the right to fight endless wars and the money that goes with it. Congress has authorized more than $6 trillion for the endless and failed wars in Afghanistan, Iraq, Syria, Libya and other parts of the world in the past two decades.

U.S. domestic police forces have benefited from these endless wars. It is not by accident that via Section 1033 of the National Defense Authorization Act, the Pentagon has distributed $5.4 billion worth of military equipment to police agencies since the law was passed a generation ago. Of that amount, $980 million – or 18 percent – was handed out in 2014 alone. That was the year Mike Brown, Eric Garner and others were killed and the Black Lives Matter movement intensified opposition to police killings.

Whether, in Ferguson, Baltimore, Minnesota, Staten Island, Houston or the most remote town, the social system is waging war on its people. When the government equips and trains the police as soldiers, the government is treating its people as enemy combatants. The “militarization” of police officers “encourages them to adopt a ‘warrior’ mentality and think of the people they are supposed to serve as enemies.” For decades the Pentagon has been training Special Forces in Urban warfare.

Hawaii Sen. Brian Schatz recently announced that he will introduce an amendment to the National Defense Authorization Act to end the 1033 Program. NYS Senator Gillibrand sits on the Armed Services Committee, which helps prepare the NDAA for Congress – please contact her to demand that she support the amendment and that the military budget be slashed.

These police killings are occurring at the same time millions of people are fighting COVID-19. Throughout the world the exploited have borne the brunt of this pandemic. Blacks, Hispanic communities, native peoples and other oppressed peoples in the U.S. are bearing the brunt of the crisis.   According to a Johns Hopkins study, while Black people represent 13.4% of the American population, they account for more than half of all COVID-19 cases and almost 60% of deaths.

We recognize that these deaths are not by accident. African-Americans and Latinxs  are over-represented in essential jobs that increase their exposure to the virus, and that living in conditions of racially militarized communities, exploitation and low wages means that many people of color feel compelled to leave home to seek work. Dense, multi-generational housing conditions make it easier for the virus to spread. On top of this, many Latinx communities continue to face ICE raids. This economic crisis has unleashed intense suffering and with over 40 million unemployed. In the midst of this depression, Congress has unloaded over $6.2 trillion dollars to hedge fund managers, bankers, pharmaceutical executives, big corporations and the rest of the ultra-rich. Many small business owners who were supposed to benefit from the legislation for relief have not received a cent.

The Syracuse Peace Council and the Pan African Community of Central New York stand in solidarity with all of those standing up for their democratic rights by protesting and intensify the call for the demilitarization of this country at home and abroad. As a first priority, we demand that State, County and City officials reject the call by Mr. Trump to deploy active military into communities. We call for an urgent cut in the military budget so that the money can go to the millions of people who have lost their jobs. We support passing the amendment to the NDAA to cancel the 1033 program which distributes military equipment to police agencies. We agree with the declaration of the City of Columbus, Ohio that declared racism is a public health crisis.

The fight against racism must be the call at this moment to stop creeping fascism. If we are to learn anything from the last depression, we learned that economic crisis, racism and militarism lead to global war. The people of Syracuse must make their stand with us against the war at home and abroad.

WRVO Coverage of the Protests