This #MayDay, as La Via Campesina, we reaffirm that workers’ rights are also peasants rights! 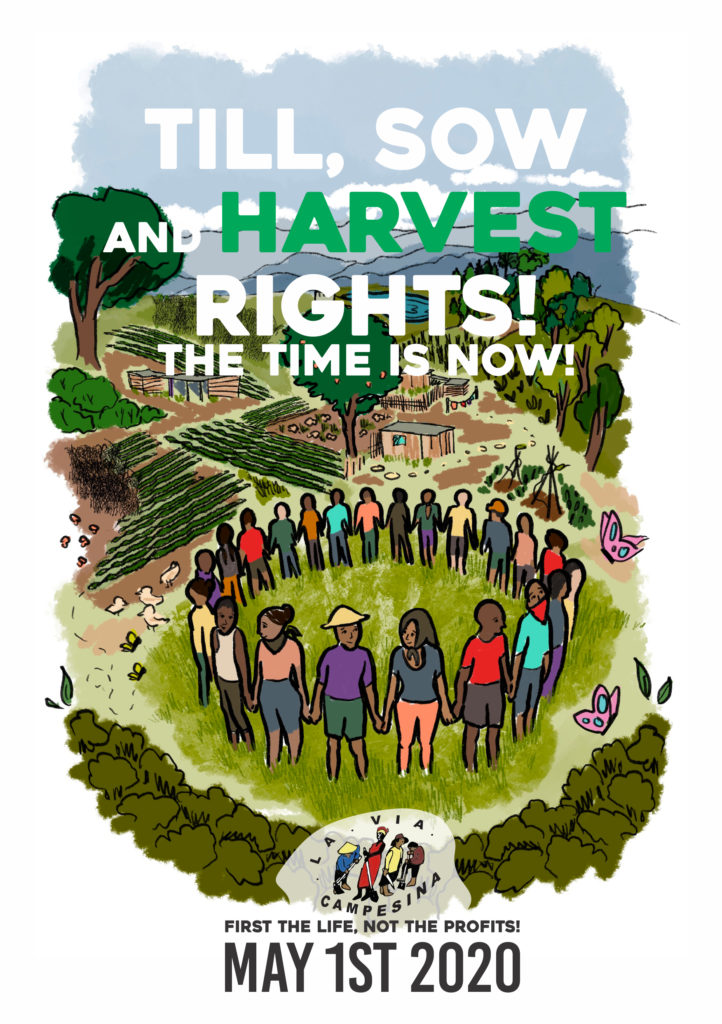 Harassment observed in the context of the COVID-19 pandemic adds to the violence historically perpetrated against our peoples. The focus of the news on this pandemic should not make us forget the systemic and systematic violence against peasants and other rural workers, and the violations of their rights. In search of a decent income and to secure their means of production, rural workers in different parts of the world constantly face hostility, violence, persecution and criminalisation. This situation is exacerbated by the implementation of exceptional measures against the disease.

In their crisis, the capital personified in the transnational mining, agribusiness and hydro-business companies already harassed rural, water and forest peoples; with the pandemic, governments subjected to these companies have been justifying persecution and extermination. However, their concern is much less about saving lives than it is about trying to save the capitalist economy, built with the blood of thousands of workers around the world.

For peasants, fisherfolk and forest peoples, the daily struggle under COVID-19 has been a challenge. In several countries, when trying to access markets to sell their crops or products, peasants and other food producers have been facing economic or criminal sanctions for moving outside their communities. Local markets, fairs, etc., have been closed down as a preventive measure, but large supermarkets have been encouraged to continue operating, exploiting their workers and sometimes speculating on food prices and other products such as masks. We hereby wish to stress that peasants are capable of adopting rigorous sanitation measures in order to avoid contamination and being contaminated. In agricultural work, people who were led to use toxic products, such as pesticides and others, are now the group most at risk from COVID-19, due to the negative impact these products have on people’s health. Communities of African descent, indigenous peoples, migrants, LGBTI people, the urban poor as well as women are parts of the population who suffer most from the disproportionate impact of the health, social and economic crisis.

Domestic violence has intensified with confinement; homes have become more dangerous for those women, children and elderly who were already victims of violence. Feminist groups supporting those affected by violence are limited by forced confinement and suffer attacks on their freedom of expression in the digital media.

The situation also affects international migrants and internally displaced persons, especially in overcrowded refugee camps. Adults and children face arbitrary and prolonged detention and abusive treatment in unsanitary and degrading conditions, in addition to police abuse. People involved in food aid have been fined in Northern countries and persecuted in countries with autoritarian regimes.

Since the COVID-19 outbreak, governments around the world have applied more or less drastic restrictions on freedom of movement and freedom of assembly. A pandemic should be fought with information, care, universal and free public health, not with police and armies attacking people.

Some governments are hiding behind this crisis to specifically attack – or allow the attack of – social leaders and defenders of their territories. Many journalists and writers have also been targeted for criticizing governments; some have disappeared or been silenced. At the same time, large media groups have continued to play an important role in spreading out discrimination and hate speech against specific social groups.

Cases of arbitrary imprisonment, absence of communication about political prisoners’ conditions, have been reported. Quarantine measures have led to the suspension of judicial services, which has served as an excuse to prevent the release of people detained, as well as complaints and access to judicial remedies by those who have been threatened or attacked. Claims for better health conditions for prisoners, in the face of the Coronavirus, have been harshly repressed in several countries. State of emergency, increased militarization and police presence have become the new norm in many parts of the world, raising concerns that these powers might not be relinquished once the crisis has passed.

Grassroots organisations’ activists and leaders also draw attention to the long-term consequences and implications of the increased digital surveillance being implemented around the world to supposedly contain the spread of the virus. Not only does this put at risk the digital rights and privacy for society at large, but it also allows for greater control of people’s work and movements, and increases the risk of – online on their freedom of expression, and offline on their lives – attacks targeted at them, their families, communities and organisations. At the same time, those who do not have access to technologies and various communication tools find themselves isolated and unable to communicate about their situation and to organize themselves with others.

The pandemic has unveiled the state of exclusion and inequality in only a few weeks. The predominant agro-food system has proved incapable of combating hunger, poverty and appalling working conditions. If the structural causes of the many crises that humanity has been experiencing are not addressed, social mobilizations and protests will intensify, along with measures of repression and control by those who hold political and economic powers. The pandemic has prompted an already-known structural crisis of capitalism.

We must strengthen alliances amongst grassroots organizations, preserving the lives of those who fight for their territory, for their culture, for a way of producing life that does not destroy the planet. We must raise awareness about the threats that people and their organizations face, especially those who are most isolated. We must denounce in all possible ways the violence suffered, targeting governments, companies, landowners and others who are involved in the persecution, criminalization, disappearance and assassination of activists and leaders of popular movements and organizations. Violence is, and remains, a structural rather than an emergent phenomenon, and must be addressed as such with all the appropriate resources that entails.

Building together is fundamental to face today’s and tomorrow’s world. The crisis has also highlighted solidarity as well as existing and new alternatives, which must be the driving force of our collective actions to come. We will not return to violence’s “normality” and precarious situations. Capitalism has nothing to offer our peoples but violence, exploitation and death. What we say today was fundamental yesterday and will be fundamental tomorrow. It is time to promote new values, and organize resistance, producing in our territories, feeding the world and preserving the planet and humanity. It is time to strengthen solidarity, to practise resistance, to cultivate hope. This #MayDay, as La Via Campesina, we reaffirm that workers’ rights are also peasants rights! 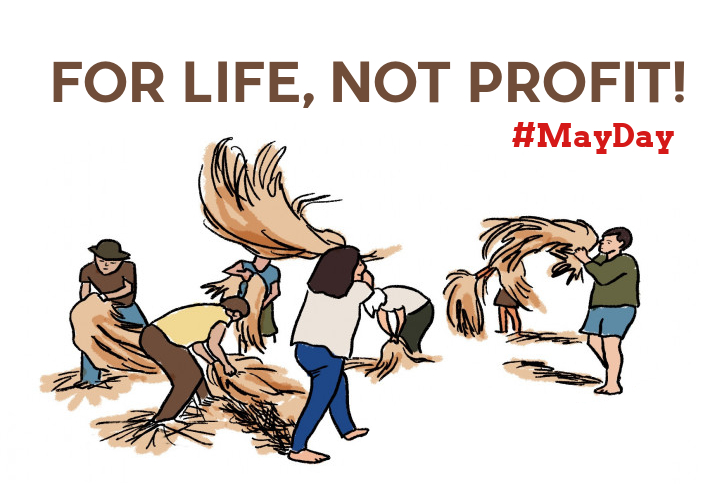