I didn’t realize coming in to this that the author of A More Beautiful and Terrible History would be presenting and I got so excited when I did! Her book was my inspiration to take a hard look at how my lessons were framed this year and make a change.

I learned a lot. The length of the session was perfect. We scratched the surface but also dove deep with resources to continue learning and growing. This Zoom with over 200 participants was way more productive than Zooms I’ve been on with 10 or less people. KUDOS to the team!

On International Workers’ Day (May 1), close to 300 educators, parents, and students joined the session with Jeanne Theoharis and Jesse Hagopian on the radical history of Dr. Martin Luther King Jr.

This sixth session in the Zinn Education Project People’s Historians Online series addressed King’s positions on oppression in the North, police brutality, the Memphis sanitation workers, reparations (the “bad check”), the Poor People’s Campaign, and more. Theoharis also talked about the radical influence of Coretta Scott King, which generated a lot of interest in the chat box and session reflections.

Hagopian opened the conversation by noting, 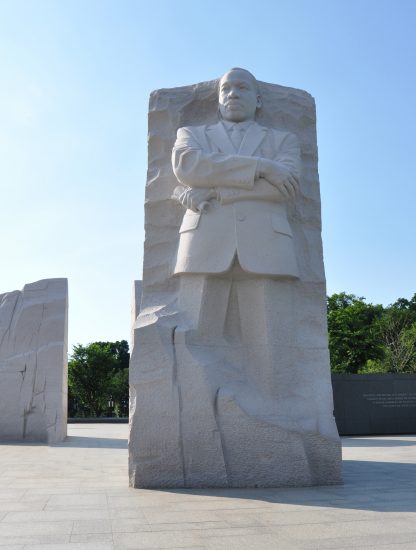 In some ways Dr. Martin Luther King Jr. is as close to a saint as we have in this country. In A More Beautiful and Terrible History you write, “When asked to name a ‘most famous American’ other than a president ‘from Columbus to today,’ high school students most often chose Martin Luther King Jr. and Rosa Parks.”

Theoharis responded that while he was alive, King did not enjoy popular support. In fact, 75% of Americans did not approve of King’s actions and the U.S. government and corporate media actively tried to undermine him. Since his assasination, a fable has been created about King that makes him a safe, convenient hero as Carl Wendell Hines Jr. writes in his poem A Dead Man’s Dream,

For they cannot rise to challenge the images

It is easier to build monuments

Than to build a better world.

Participant Sashray McCormack shared two of the polls conducted during the session as evidence of “how much our history has been sanitized and whitewashed” and therefore how important these sessions are to correct the narrative in classrooms.

This is why resources like the @ZinnEdProject are important… pic.twitter.com/lMm6e8iF44

Theoharis responded to a question about King’s position on public health by pointing to his statement at an annual meeting of the Medical Committee for Human Rights in Chicago in March of 1966. A participant posted an excerpt from that speech in the chat box, as reported by the Asssociated Press.

We are concerned about the constant use of federal funds to support this most notorious expression of segregation. Of all the forms of inequality, injustice in health is the most shocking and the most inhuman because it often results in physical death. I see no alternative to direct action and creative nonviolence to raise the conscience of the nation.

Jesse notes that this May Day! And reminds us that King was killed while offering support to the Memphis Sanitation Workers’ Strike—in today’s parlance, these were “essential workers”! https://t.co/TuW1ssDyW5

She quotes King: “As the nation, Negro & white, trembled with outrage at police brutality in the South, police misconduct in the North was rationalized, tolerated, & usually denied.”

Here is a video of the full session (except the breakout groups.)

Here are some of the materials mentioned by the presenters and in the chat box.

Find more lessons, books, films, and articles to teach outside the textbook about Dr. Martin Luther King and the Civil Rights Movement in Related Resources at the end of this page.

Here are some of the responses from participants in the session evaluation.

Analyzing the WHOLE speech from the March on Washington and talking about Coretta Scott King and other women’s organizing = way to increase student engagement with what has become a boring subject to them (the sanitized version of King).

I think learning more about the role of Coretta Scott in shaping King’s view is revolutionary to my understanding. I intend to focus more on the women in the movement and look into more primary source documents from the women leaders in the movement at the same time.

I didn’t realize that Dr. King was not liked during his time and that people are reacting the same way to BLM and Poor People’s campaign as they did to him during his time.

I learned about the intricacies of King’s work, especially in regards to his stance on northern racism, police brutality’s and the Poor People’s Campaign. I look forward to incorporating this into my new school’s curriculum!

I was able to get so many good book recommendations and speech references to look up. I can’t wait to use them to deepen my understanding. Everything I’m learning is helping me to resist the oversimplified and sanitized version of history that allows these injustices to be reborn and repurposed.

In the breakout room, I loved hearing from Rukaya — a high school student in Seattle — about why learning the radical version of Dr. King is so important to her. She described how it helped her realize that modeling her own life around leadership in the Civil Rights Movement didn’t have to be Malcolm X or Dr. King. Rukaya likes knowing about the complexity of Dr. King’s life and admires his firm stance on housing and economic justice. In my classroom, I want to help students meet people from history who guide their decision making. The radicalized Dr. King offers students more than a charismatic preacher; this Dr. King offers more wisdom and possibility for the choice points that will inevitably come up for students. This was a cool connection that I will certainly hold in my heart as I incorporate historical information about Dr. King to my curriculum. I also really appreciate the focus on systemic racism beyond the South. As a teacher in the Northeast, I hear the myth about Southern-only discrimination, and it was helpful to see how Dr. King was in Seattle, Los Angeles, and New York! More content to help un-do this troublesome idea.

The early life of Coretta Scott King and her influence in the anti-Vietnam War Movement. As a high school Social Studies teacher, I plan on using this information as a supplement to discuss US imperialism and militarism past and present with my seniors. This can take the form in both government and economics curriculums.

The most important thing I learned was a deeper insight on the trials of Dr. Martin Luther King before he was the King. I will use what I learned to educate my peers on the history that wasn’t taught.

I liked the combination of pre reading, lecture, and break out room.

These workshops are giving me life! As a teacher its great to meet with other likeminded educators

I loved the format, again. I liked the structure of master narratives/truths that Jeanne used as a way to understand more of the complexities/truth of the history. Breakout group was nice to be able to talk to people. Maybe a bit more time in the breakout groups to get a little deeper in our conversations.

It was awesome. I liked the expanded time in breakouts and 3 minute warning, I felt a beginning and closure to the conversation.

Loved the breakout groups and the designation of a facilitator. Thank you for calling out an equity norm before the breakout. Also, this was probably the only zoom I’ve been in where the chat was actually just as interesting as the speaker.

Was a great session. Good format. Nice to let everyone chime in and share a verbal goodbye in the end. Solidarity is great. Maybe we could end with a promise to concrete action….. Thanks and respect!!!

LOVE these sessions so much. As I wrote in the chat, they are a very, very silver lining of coronavirus.

ZEP note: Overall, about 85% of people said they like the breakout groups and many want to them to be longer. A few people commented that their breakout group did not work well — in most cases because it lacked a facilitator or some participants logged off.

Here are quotes by Dr. Martin Luther King Jr., some of which were shared by Jeanne Theoharis during the session.

In Saturday Review in November 1965, three months after Watts uprising.

In my travels in the North, I have become increasingly disillusioned with the power structures there… [who] welcomed me to their cities and showered praise on the heroism of Southern Negroes. Yet when the issues were joined concerning local conditions, only the language was polite; the rejection was firm and unequivocal.

As the nation, Negro and white, trembled with outrage at police brutality in the South, police misconduct in the North was rationalized, tolerated, and usually denied.

Speaking to a multiracial audience at the Urban League anniversary in NYC in 1960.

. . . a pressing need for a liberalism in the North that is truly liberal, that firmly believes in integration in its own community as well as in the deep South . . . who not only rises up with righteous indignation when a Negro is lynched in Mississippi, but will be equally incensed when a Negro is denied the right to live in his neighborhood. . . or secure a top position in his business.

Refuses to condemn Brooklyn CORE’s planned stall-in around the World’s Fair in 1964.

As long as the struggle was down in Alabama and Mississippi, they could look afar and think about it and say how terrible people are. When they discovered brotherhood had to be a reality in Chicago and that brotherhood extended to next door, then those latent hostilities came out.

When we ask Negroes to abide by the law, let us also demand that the white man abide by law in the ghettos. Day-in and day-out . . . he flagrantly violates building codes and regulations; his police make a mockery of law; and he violates laws on equal employment and education and the provisions for civic services.

In Where Do We Go from Here: Chaos or Community?

Negroes have proceeded from a premise that equality means what it says. . .  But most whites in America, including many of goodwill, proceed from a premise that equality is a loose expression for improvement. White America is not even psychologically organized to close the gap  —  essentially, it seeks only to make it less painful and less obvious but in most respects retain it. Most of the abrasions between Negroes and white liberals arise from this fact.

Jeanne Theoharis is a distinguished professor at Brooklyn College. She is the author or co-author of nine books and numerous articles on the Civil Rights and Black Power movements and the politics of race and education. Her books include the award-winning titles The Rebellious Life of Mrs. Rosa Parks and A More Beautiful and Terrible History: The Uses and Misuses of Civil Rights History.

Jesse Hagopian teaches Ethnic Studies and is the co-adviser to the Black Student Union at Garfield High School in Seattle. He is an editor for Rethinking Schools, the co-editor of Teaching for Black Lives, and editor of More Than a Score: The New Uprising Against High-Stakes Testing.

Read about and register for more sessions. 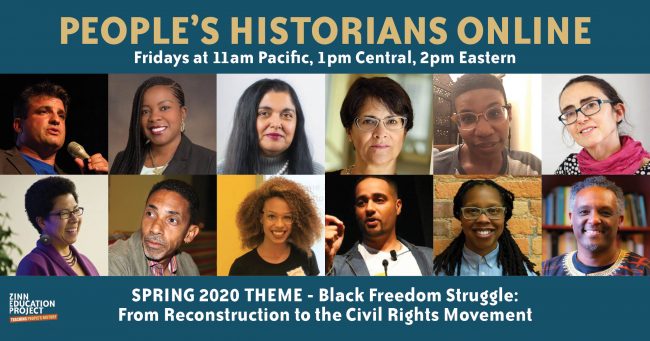 Please make a donation so that we can continue to offer people’s history lessons, resources, workshops — and now online mini-classes — for free to K-12 teachers and students. We receive no corporate support and depend on individuals like you.