On Feb. 5, Zhao Renyuan, a 65-year-old woman from Guilin in Guangxi province, texted her sister saying that Chinese security agents were knocking at the door in the middle of the night. They claimed they were checking temperatures, but Zhao was skeptical. Then she disappeared.

After days trying to find her
whereabouts, her family finally learned that police had detained Zhao and her
husband.

For sharing uncensored information with others, including about their faith, the Buddhist meditation and spiritual practice Falun Gong.

The
Chinese Communist Party (CCP) has been trying to eradicate Falun Gong for over 20 years, deploying massive
detentions, rampant torture, and large-scale deaths in custody to do
so. From that perspective, the plight of Zhao and her husband Xie Jianxin may
not seem unusual.

But there is something particularly
horrific about Chinese security forces continuing to prioritize the repressive
effort in the midst of a pandemic — and moreover, using measures like checking
for fever to trick people into opening their doors — even in parts of the
country like Guilin that were not placed under complete lockdown.

Neither
is the elderly couple’s case isolated.

First-hand accounts from China and
local government websites across the country — from the northeastern province
of Jilin to Jiangxi in the south and Shandong in the east — indicate that
security forces nationwide have continued to actively seek out, detain, and
sentence Falun Gong practitioners amidst the public health crisis.

According to the overseas Minghui website, which collects accounts of Falun Gong persecution from a network of correspondents in China, during the month of February alone, at least 282 practitioners were detained (some already held for at least eight days of administrative detention), 113 harassed, and 15 sentenced after sham trials to prison for up to nine years. The scale of detentions represents an uptick from February 2019.

Police are arbitrarily depriving
these innocent people of their freedom for trying to share information they
feel will be helpful to their fellow citizens during this extraordinary crisis.

These reports and conversations with
overseas contacts of Falun Gong practitioners in China give a sense for three
types of information they are sharing and being punished for
circulating.

Falun Gong activists
in China are well-known for sharing tools that enable people to jump the so-called Great Firewall and
access otherwise blocked websites and censored information. Since early
February, online
censorship in China has tightened considerably. Censors are
deleting investigations by professional journalists pushing back against
restrictions to expose official cover-ups and ordinary citizens sending live
updates to each other.

Meanwhile, Chinese state media have saturated the airwaves with sometimes incredulous propaganda and even outright fabrications blaming the virus’ origin on the U.S. military.

Technologists who practice Falun Gong and reside in the United States have developed various tools that enable users in China — even those with limited technical knowledge — to jump the Great Firewall at no cost.

Practitioners in China regularly download these tools onto CDs and USB keys or share links for download on social media in order to enable others to reach the open internet, but they are taken into police custody for doing so.

Falun Gong practitioners in China often share content exposing the CCP’s long history of persecution against Chinese people. They encourage people to symbolically renounce their ties to the party and related youth organizations, an action many refer to as ‘Tuidang.’ Over 300 million Chinese people in China and globally, most who do not practice Falun Gong, have taken this step over the past 15 years — often using aliases because of the risk of reprisals.

Conversations with Chinese practitioners and scholarly analysis of the movement show that the activists’ motivations are not political, but rather spiritual. They wish to grant others an opportunity to renounce the CCP’s violent ideology, repent for past wrongdoing (such as participating in the persecution of others during Maoist campaigns or the anti-Falun Gong crackdown), and seek a better future. 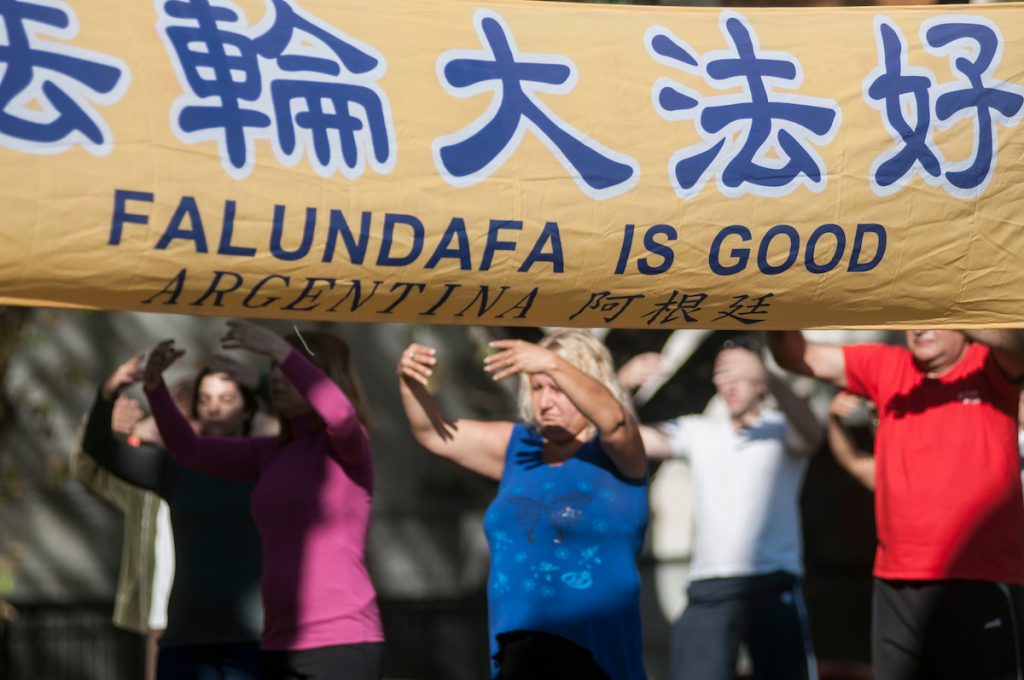 Some Falun Gong practitioners in China have been detained simply for encouraging others to say phrases like “Falun Dafa hao”[“Falun Dafa (another name for the practice) is good”] or “Zhen-Shan-Ren hao” [“(The values of) truthfulness, compassion, tolerance (central tenets of Falun Gong) are good”].

The activists’ purpose is not so much to get others to express support for the plight of practitioners themselves, but rather to suggest that people say these phrases as an action that facilitates their aligning their thoughts more closely with the divine nature of the universe. The aim is to offer hope amid desperation and a severe shortage of medical resources.

Falun Gong practitioners are not alone in this respect. Tibetan Buddhists have encouraged each other on the Chinese social media application WeChat to offer prayers, with some people detained as a result. During the lockdown, Christian pastors in Wuhan gave virtual sermons via video and coordinated joint prayers.

With
the coronavirus outbreak having now spread out from China to the rest of the
world, perhaps more of us could take a page out of the book of compassionate
and courageous believers in China. We can re-examine our own fundamental
beliefs, seek hope and comfort from our faith, and try to live our lives during
this difficult time more in line with values such as integrity, kindness, and
sacrifice.

Dr. Larry Liu is a Chinese-American data scientist residing in
Washington DC and deputy director of government and advocacy at the Falun Dafa Information Center. The views and opinions expressed in this article are those of
the author and do not necessarily reflect the official editorial position of
LiCAS.news.