Beijing has tried to protect jobs and spur lending, but it may have to do more to get its huge, damaged and incredibly complex economy going again. 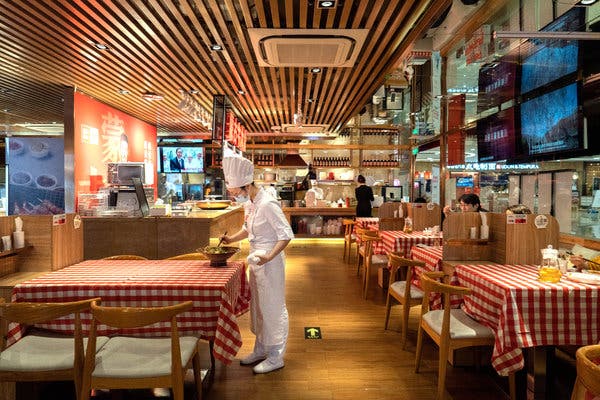 Xibei, a national restaurant chain in China, obtained a large line of credit from a state-owned bank to continue paying salaries.Credit…Giulia Marchi for The New York Times

BEIJING — The world is opening its wallet to fight the effects of the coronavirus outbreak. The United States unveiled a $2 trillion rescue package. European countries have announced their own spending blitz, and Japan approved a nearly $1 trillion economic stimulus plan.

The country that famously helped kick-start the world economy after the 2008 global financial crisis with a half-a-trillion-dollar spending splurge has been relatively restrained this time around. While it is helping companies keep workers and pushing its state-run banks to lend more, China has held back from spending on big packages or flooding its financial system with money.

In an odd juxtaposition, the communist country has also mostly refrained from giving money directly to its people. By contrast, President Trump — who once denounced the prospect of growing socialism in the United States — signed into law a package that includes $1,200 checks for all but the most affluent American adults.

A growing number of people say China should do more. Prominent economists are calling on Beijing to get the country’s consumers spending again. At least seven provinces and cities are already distributing vouchers to empower spenders.

Justin Lin Yifu, an influential government adviser, called at a conference last week for China to rekindle economic growth by introducing vouchers nationwide that must be spent quickly or become worthless.

“Consumption vouchers are more effective” than distributing cash, he said. “People may not consume cash when they get it, so it will not be directly converted into demand.”

The aim is to help China’s growing ranks of college-educated employees like Huang Yihan, as well as the factory workers who largely powered the economy in the past. Ms. Huang, 24, lost her job at an eight-employee ad agency in Shanghai in early February, and received only two months’ pay as severance because she had been a recent hire.

Like many in her generation who grew up in a rapidly expanding economy, Ms. Huang did not expect to find herself unemployed. She studied hard in high school and attended a top-notch university in Guangzhou in southern China. But now she surveys a hiring landscape that has suddenly turned bleak for millions of young Chinese.

The quarterly rent payment for her share of an apartment is coming due in mid-April. She faces a choice of paying the rent or paying for food as she looks for her next job, though she expressed confidence that one could be found.

“If I take out the rent, I won’t be left with much money,” she said.

The extent of the damage that China must reverse still is not clear. Its huge economy, a major engine of global growth, was effectively idled in February after the coronavirus spread from an initial outbreak in the city of Wuhan. A glimpse of the full impact on the country may come on April 17, when China reports economic statistics for the first three months of the year. But economists widely believe the shutdown has doomed untold numbers of jobs and small businesses.

Restarting the economy will be a lot tougher than it was after 2008, when China unveiled a $586 billion spending package. That package funded highways, bridges and high-speed rail lines across the country. It enabled big construction projects. Steel, glass and cement factories revved up to meet the new demand.

China’s economy has tripled in size since then and become more diverse and more complex. China now has a much more highly educated labor force with less enthusiasm for manual labor. The service sector has become more important.

“Negative impacts of the coronavirus disease are mainly borne by people working specific industries, such as restaurants, hotels, transportation companies, movie theaters and tourism,” said Zhi George Yu, an economist at Renmin University of China. “Infrastructure investment will not directly absorb many workers who worked in the industries mostly impacted by the disease.”

China is still recovering from its last binge. In addition to the spending, Beijing unleashed $2 trillion in new lending and made other moves that dumped still more credit into the financial system. As a result, China became one of the world’s most indebted economies in less than a decade. Economists inside and outside the country have warned that the debt — much of it hidden away on the books of local governments and state-run companies — could disrupt the financial system and hold back long-term growth.

Even if China strengthens its economy internally, it must cope with a lack of demand for its goods from abroad.

From brick-and-mortar stores overseas, “in the last few days, the amount of orders that have been canceled at the factory is staggering,” said Sabrina Finlay, chief executive of Otabo, a footwear company in Minneapolis that does its manufacturing in China. Online sales in China have improved as the country bounces back, she added, but traffic at stores there has not fully returned.

Like France, China has focused on helping companies keep paying their workers. The newest moves, unveiled last week, will support the state-owned banking sector to lend another $200 billion to businesses, particularly smaller ones. Local governments have also issued $150 billion in bonds so far this year to pay contractors for the construction of roads, bridges and other projects.

When Xibei, a chain of 386 restaurants specializing in roasted lamb and other northwestern Chinese cuisine, warned publicly that it was running low on money to pay its 22,000 employees, China’s government and banking system jumped into action.

Within two days, the government was discussing financial assistance, said Jia Guolong, the company’s chairman. Three days later, loan documents were signed for a $200 million, three-year, low-interest line of credit from a state-owned bank. Four days after that, Xibei was paying its workers.

“It was a requirement from the bank that we use the money to pay only salaries and food suppliers,” Mr. Jia said in a telephone interview.

But Beijing is providing almost no financial assistance directly to the general public. As factory orders have dried up for exports and abroad, many manufacturing employees no longer work overtime, which previously accounted for up to a third of their compensation. While the last large-scale lockdown in China ended in Wuhan on Wednesday morning, many social-distancing rules remain in effect nationwide and have discouraged people from going out to eat or paying for other services.

So spending has stayed weak. Even now, Xibei’s restaurants have just a little over half the daily sales they had before the pandemic, Mr. Jia said.

Government data shows employment by large industrial enterprises has stayed steady at about 68 million people. But the data doesn’t show the impact on small and medium-size businesses, which account for as much as 80 percent of the country’s urban employment.

Professor Yu, of Renmin University, and other economists are increasingly recommending an approach pioneered this spring by affluent areas in east-central China: handing out vouchers to stimulate consumption.

Hangzhou, the hometown of Alibaba, the Chinese electronic commerce giant, has been particularly active in issuing electronic vouchers. Each of the past two Friday mornings, residents jumped online to obtain a packet of five discount vouchers that could be used at restaurants and shops through Alibaba’s electronic payments system, Alipay.

Because the vouchers are valid for only a week, they provide an incentive for recipients to use them quickly instead of saving the money, as some may do with the $1,200 checks being distributed in the United States.

The packets of vouchers or coupons are financed by the municipal government, which reimburses local businesses that accept them. But the value of each voucher in a packet is modest: $1.41 to $6.35, and only one voucher may be used per purchase. Beijing economists say the national government is considering rolling them out.

“Sooner rather than later, there will be a coupon on a large scale,” said Zhu Ning, the deputy dean of the Shanghai Advanced Institute of Finance.

For now, the Hangzhou program seems popular with residents. Perhaps too popular.