Let us help you start your day. 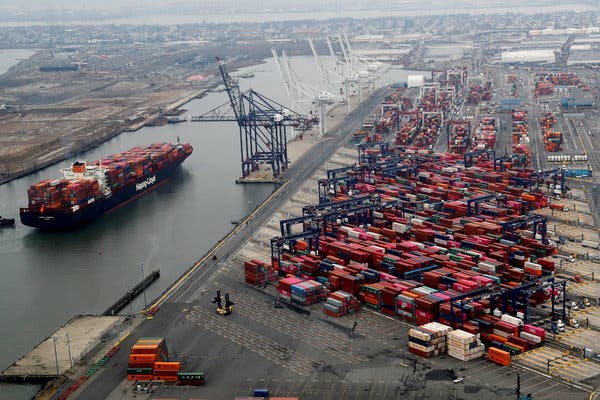 Container traffic at a New Jersey port amid forecasts of a sharp drop in global trade this year. Credit…Mike Segar/Reuters

A grim forecast for global trade

As coronavirus lockdowns paralyze big economies worldwide, the World Trade Organization said Wednesday that global trade this year could shrink by 13 percent to 32 percent or more compared with 2019.

“Trade in 2020 will fall steeply in every region of the world and basically across all sectors,” Roberto Azevêdo, director general of the W.T.O., said in a video briefing.

The W.T.O. economists believe the sharp fall will be worse than the trade slump from the 2008 financial crisis. Global trade could rebound rapidly, but it would depend on how quickly the pandemic was brought under control, and the policy choices governments took to support their economies, Mr. Azevêdo said.

Germany and France, Europe’s largest economies, warned that they were headed toward their sharpest downturns since World War II, even as some European countries moved toward a loosening of restrictions put in place to slow the spread of the virus.

More than 1.4 million cases of the virus have been confirmed across at least 177 countries, and 86,000 people have died. Here are the latest updates from the U.S., where the virus has stricken more than 418,000 people. We also have the international picture and maps of the pandemic.

We want to hear from the doctors, nurses and health care workers risking their lives during the coronavirus pandemic. We invite you to share your story here and submit a photograph of yourself or a video responding to our questions.

Bernie Sanders drops out of the U.S. presidential race

“In this most desperate hour, I cannot in good conscience continue to mount a campaign that cannot win and which would interfere with the important work required of all of us,” Senator Bernie Sanders said in a video address on Wednesday morning. [Watch the video.]

Mr. Sanders’s quest for the White House began in relative obscurity but ultimately elevated him as a champion of the American working class.

Analysis: The tops of the Republican and Democratic tickets are now clear, but the coronavirus pandemic has overtaken all other issues in the campaign and may well turn the election into a one-issue debate over Mr. Trump’s record in the crisis.

Across India, cities can suddenly breathe

Delhi has blue skies, and the city’s residents are stunned. The fresh air is one consequence of India’s coronavirus lockdown, the world’s biggest and one of the strictest. The measure has shuttered factories, grounded flights, evicted taxis and buses from the roads, and brought the economy to a screeching halt.

India has 14 of the 20 worst polluted cities in the world. But last week, Delhi recorded an Air Quality Index reading of 38, about as good as anywhere in the world. Residents are accustomed to readings in the range of 150 — on good days.

Environmentalists are using the fresh air revelation to challenge the widely held belief that India is doomed to suffer bad air because of its geography and climate.

“Clearly, this is not something that can’t be reversed,” said Jai Dhar Gupta, an environmental activists and entrepreneur. “We’ve just reversed it.”

Related: Seismologists worldwide have been able to register big drops in vibrations levels, showing that the roar of urban life has turned into a whisper. “It’s crazy,” said the scientist in Belgium who first noticed the phenomenon.

If you have 10 minutes, this is worth it

Chinese leaders are leveraging an increasingly sophisticated global propaganda machine to cast China as a responsible world power that has triumphed over the coronavirus where others have stumbled. But they still face criticism that the government initially hid the outbreak, continues to understate its severity and dispenses aid only to burnish the country’s standing.

When the pandemic subsides, governments worldwide will confront crippled economies, unknown death tolls and a profound loss of trust among many of their people. Whether Beijing will step into that void, or be pilloried for it, may determine the fate of its ambitions for global leadership.

Britain’s leadership: Prime Minister Boris Johnson’s hospitalization in the pandemic has left his untested foreign secretary, Dominic Raab, 46, to guide the country through one of its greatest peacetime crises.

German soccer: This week, all the clubs in the country’s top two divisions returned to the practice field while observing local health protocols, offering millions of soccer-starved supporters the surest sign yet that they will soon be able to watch the sport once again, and far earlier than fans in Europe’s other big leagues.

Snapshot: Above, jigsaw puzzles are the new global pastime. Demand has surged past levels normally seen at Christmas. Prime Minister Scott Morrison of Australia even allowed people to leave the house to buy them.

What we’re reading: This GQ feature that goes inside Eliud Kipchoge’s Kenyan training ground. “Come for the photos of the fastest marathoner in history, wearing couture,” says Talya Minsberg, a Sports editor. “Stay for the wisdom shared by Kipchoge.”

Cook: Green goddess dressing, perfect for veggie dunking, uses almost any soft herbs or greens, puréed with something creamy, something garlicky or oniony and a few anchovies.

Watch: Is Drake’s new single, “Toosie Slide,” a TikTok or a song? Our critic Jon Caramanica explores the question. More formally, we’ve found a lot of good dance to stream. And if it’s been a while since you watched Alfred Hitchcock’s “Rope” (maybe you’ve never watched it?), this could be the day.

Do: Are the children squabbling? We asked a bar bouncer, a kindergarten teacher, a hockey referee, a marriage and family therapist, and a police officer: How do you break up a fight? Then we figured out how to farm, inside your home.

Our reporters and editors have lots more ideas about what you might want to read, cook, watch, and do while staying safe at home. Here’s our full collection.

Around the world, online habits are changing. But are we giving too much power to tech companies now — and possibly forever? Shira Ovide, the host of our On Tech newsletter, chatted about that question on Twitter with Kara Swisher, a veteran technology journalist and a New York Times contributing Opinion writer. Here are portions of their conversation, lightly edited.

Shira: How do you feel about us relying more than ever on services from tech companies?

Kara: I’m nervous about it. It doesn’t abrogate the problems they had before.

Facebook has been better than in the past; it’s not permitting false information about the coronavirus to spread. I’m glad they are doing this, but I’m not going to give them a standing ovation for it.

What should tech companies like Amazon do to protect their workers?

Tech companies have lived off the back of other people’s cheap labor for a long time — whether it’s an Uber driver, a delivery person or Amazon warehouse workers. It’s just coming into sharp relief.

These workers deserve much stronger pay and more benefits. That’s costly to the people who want to stay enormously wealthy, and to consumers who like a low price.

What is keeping you happy right now?

I just had a baby with my girlfriend, and staring at a baby who has no idea that any of this is happening is really quite something. Watch a baby eat bananas for the first time. You will feel just fine.

Thank you
To Melissa Clark for the recipe, and Theodore Kim and Jahaan Singh for the rest of the break from the news. You can reach the team at briefing@nytimes.com.

P.S.
• We’re listening to “The Daily.” Our latest episode is about the U.S. Navy’s leadership crisis.
• Here’s our Mini Crossword, and a clue: Party souvenir (five letters). You can find all our puzzles here.
• The Times’s DealBook team will discuss the pandemic’s deep and potentially lasting impact on media and advertising with our media columnist Ben Smith and our media industry reporter Edmund Lee at 11 a.m. Eastern on Thursday (1 a.m. Friday in Sydney). R.S.V.P. here.