We’re covering new research on the coronavirus’s arrival in New York, a virus-related cease-fire in Yemen, and Bernie Sanders’s withdrawal from the presidential race. 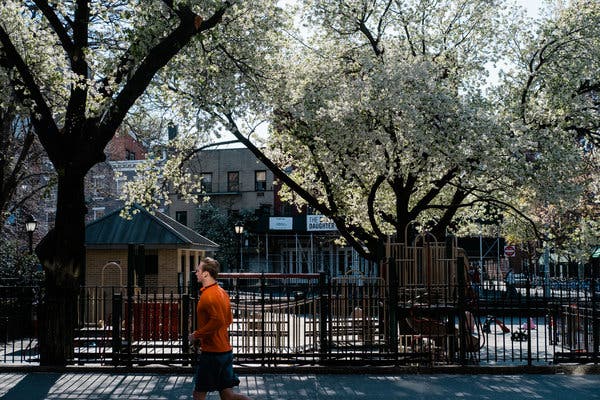 A closed playground in New York. “We are flattening the curve,” Gov. Andrew Cuomo said on Wednesday, when the state reported more than 700 deaths. “Thank God. Thank God. Thank. God.”Credit…Gabriela Bhaskar for The New York Times

‘Glimmers of hope’ amid a rising toll

We start today with a note of cautious optimism from our writer Dan Barry: “The world began this week to see small but encouraging signs that concerted efforts to drastically change human behavior — to suspend daily routines by staying at home — are slowing the insidious spread of the novel coronavirus, which has killed tens of thousands and sickened more than a million others across several continents.”

Dr. Anthony Fauci, the director of the National Institute of Allergy and Infectious Diseases, said on Wednesday that he was starting to see “some glimmers of hope,” but epidemiologists warned that a return to pre-pandemic life won’t happen safely anytime soon.

Here are the latest updates from the U.S. and from abroad, as well as maps of the pandemic.

“The Daily”: Today’s episode is about how Mardi Gras in New Orleans may have played a role in the spread of the virus.

Contact us: The Times would like to hear from the doctors, nurses and health care workers on the front lines of the pandemic. Please share your story.

As the coronavirus disrupts the global supply chain, scientists in Africa and Latin America have been told by manufacturers that orders for testing kits can’t be filled for months, because almost everything they produce is going to the U.S. or Europe.

So far, the developing world has reported far fewer cases and deaths, but public health experts fear that the virus could be especially devastating for countries with underfunded health systems.

Quotable: “If it was just one country with an epidemic it would be fine, but all the major countries in the world are wanting the same thing at the same time,” said the chief executive of a group that represents the testing industry.

Another angle: New York’s network of group homes for people with special needs has seen a surge in infections.

Closer look: Food banks across the U.S. are struggling to meet demand. “‘Crazy’ pretty much sums it up,” a food bank official in Louisiana said.

The race for the general election begins

Now that Bernie Sanders has withdrawn from the presidential race, Joe Biden is faced with the challenge of uniting the Democratic Party and winning the support of the younger, more liberal voters who powered the Vermont senator’s campaign.

Starting today, the Biden campaign is expected to highlight a series of policy positions that show how he has moved closer to Mr. Sanders on health care and other issues.

Quotable: In dropping out on Wednesday, Mr. Sanders said: “I cannot in good conscience continue to mount a campaign that cannot win and which would interfere with the important work required of all of us in this difficult hour.”

News analysis: The pandemic has turned the primary race into less of an ideological contest between the Democrats and refocused their attention on defeating President Trump in November, a correspondent for The Times Magazine writes.

Another angle: Republicans have fought the expanded use of mail-in ballots during the pandemic, arguing that it encourages fraud. Although there have been several documented fraud cases involving mail or absentee ballots in recent decades, some states that already conduct elections almost entirely by mail report little fraud. We checked some of the facts.

If you have some time, this is worth it

How can America emerge stronger?

The Times’s Opinion section is starting an ambitious project to envision how the U.S. can eventually come out of the current moment stronger, fairer and more free.

In an introduction, our editorial page editor, James Bennet, writes: “This pandemic offers the same opportunity that Americans have seized during past crises: to set aside petty differences, recognize national priorities and set to work again on creating a more perfect union. We’re launching this initiative in hopes of supporting that national instinct.”

Our special report on A.I.: As artificial intelligence evolves and expands, so does the impact on our lives. The Times examined the trend as it applies to fields including education, entertainment, science and sports.

Snapshot: Above, the Queensboro Bridge as seen from the East River promenade on the Upper East Side. Our critic Michael Kimmelman took a virtual tour of the waterfront with the architect Deborah Berke and found that it encapsulates New York City’s history.

What we’re checking out: The Social Distancing Festival, a calendar of live-streamed events. “You’ve probably already exhausted your Netflix and HBO options,” writes our national correspondent Mike Wines, “so here are different options.”

Cook: Green goddess dressing, perfect for dunking veggies, uses almost any soft herbs or greens, puréed with something creamy, something garlicky or oniony, and a few anchovies.

Read: There’s a new collection of novellas from Don Winslow out, “Broken.” Janet Maslin says it shows his range, and his bite. One begins: “No one knows how the chimp got the revolver.”

Listen: Priya Parker has a new podcast for The Times, “Together Apart,” and the first episode is all about how to celebrate Passover, Ramadan or Easter. Here are the essential John Prine songs you ought to listen to. And April is National Poetry Month. We’ve put together a great list of places you can stream poems and slams.

We have lots more ideas about what to read, cook, watch and do while staying safe at home.

Around the world, online habits are changing. But are we giving away too much? Shira Ovide, the host of our On Tech newsletter, chatted about that question on Twitter with Kara Swisher, a veteran technology journalist and an Opinion writer for The Times. Here are lightly edited portions of their conversation.

Shira: How do you feel about us relying more than ever on services from tech companies?

Kara: I’m nervous about it. It doesn’t abrogate the problems they had before.

What should tech companies like Amazon do to protect their workers?

Tech companies have lived off other people’s cheap labor for a long time — whether it’s an Uber driver, a delivery person or Amazon warehouse workers. It’s just coming into sharp relief.

These workers deserve much stronger pay and more benefits. That’s costly to the people who want to stay enormously wealthy, and to consumers who like a low price.

What is keeping you happy right now?

I just had a baby with my girlfriend, and staring at a baby who has no idea that any of this is happening is really quite something. Watch a baby eat bananas for the first time. You will feel just fine.

Thank you
Melissa Clark provided the recipe, and Theodore Kim and Jahaan Singh provided the rest of the break from the news. You can reach the team at briefing@nytimes.com.

P.S.
• We’re listening to “The Daily.” Today’s episode is about how New Orleans became a petri dish for the coronavirus.
• Here’s today’s Mini Crossword, and a clue: Old saying (five letters). You can find all our puzzles here.
• The Times’s DealBook team will discuss the pandemic’s impact on media and advertising with our media columnist Ben Smith and our media industry reporter Edmund Lee at 11 a.m. Eastern today. R.S.V.P. here.