The volume of phone calls has surged more than internet use as people want to hear each other’s voices in the pandemic. 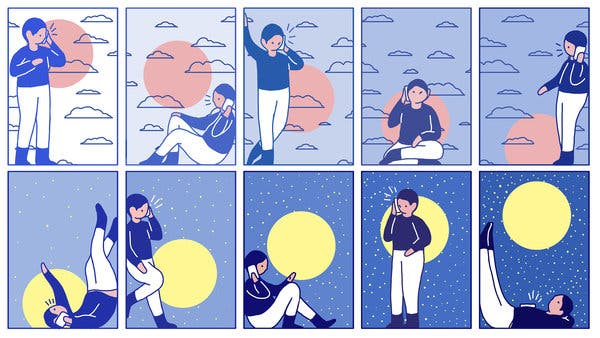 Alyssa MacKenzie, 32, rarely used her smartphone to make phone calls, apart from the occasional conversation for her work as a disability rights advocate.

But when the lockdown for the coronavirus set in, Ms. MacKenzie could no longer pop by her mother’s house a few minutes away in New Canaan, Conn. So she has called her multiple times a day, including once recently to get a recipe for pasta e fagioli.

A couple of hours later, she said, they were still talking.

“We started with the recipe, then talked about my younger brother, then my work, then her day, and next thing I knew, the soup was done,” Ms. MacKenzie said. “I needed to hear the familiarity of her voice.”

Phone calls have made a comeback in the pandemic. While the nation’s biggest telecommunications providers prepared for a huge shift toward more internet use from home, what they didn’t expect was an even greater surge in plain old voice calls, a medium that had been going out of fashion for years.

Verizon said it was now handling an average of 800 million wireless calls a day during the week, more than double the number made on Mother’s Day, historically one of the busiest call days of the year. Verizon added that the length of voice calls was up 33 percent from an average day before the outbreak. AT&T said that the number of cellular calls had risen 35 percent and that Wi-Fi-based calls had nearly doubled from averages in normal times.

In contrast, internet traffic is up around 20 percent to 25 percent from typical daily patterns, AT&T and Verizon said.

The rise is stunning given how voice calls have long been on the decline. Some 90 million wired phone lines in the United States have ceased using landline phones since 2000, according to USTelecom. Wireless calls replaced much of that calling activity, but the volume of minutes spent on phone calls hasn’t changed much over the past decade as people turned to texting and to apps like FaceTime and WhatsApp, according to wireless carriers and analysts.

New needs are emerging in the crisis. “We’ve become a nation that calls like never before,” said Jessica Rosenworcel, a commissioner at the Federal Communications Commission, the agency that oversees phone, television and internet providers. “We are craving human voice.”

Though phone calls are now made over airwaves that connect through cell towers, the appeal of talking hasn’t changed much from the earliest telephone days of the late 1800s and early 1900s, when wooden poles stretched copper wire lines across the nation and into every home in America.

In Albany, La., the priests and deacons of St. Margaret Queen of Scotland church recently divided up a list of 900 parishioners to call to check in on them, something they never did because they saw their members in person. Some of the congregants in the rural community outside New Orleans were suspicious when they answered, accustomed to robocalls from unfamiliar numbers.

But Brad Doyle, the associate priest, said they eased up when he began to speak. They talked about their daily routines and said they missed Sunday service, especially ahead of Easter. One congregant went into great detail about the Netflix documentary “Tiger King.” Many wanted to just hear a prayer, he said.

Grace McClellan, 32, a high school teacher in Charleston, S.C., has also turned to phone calls as an antidote to the loneliness of living apart from family and friends. She has begun synchronizing a daily walk-and-talk with her best friend, who lives in Connecticut. With her friend’s voice piping through her earbuds, “it feels as close as possible to a real walk together,” Ms. McClellan said.

The return of the voice call is a throwback for telecom companies. For years, Verizon, CenturyLink and AT&T have retired copper wire phone lines that were introduced 150 years ago.

The companies have instead invested in broadband networks and expanding capacity for things like higher-resolution video and video gaming. They also beefed up their networks to handle next-generation wireless technology, called 5G, which will allow people to download a movie in seconds and may spur a wave of driverless car technology and robotics.

“For years, we’ve seen a steady decline in the amount of time people spend talking to one another, especially on wireless devices,” Kyle Malady, Verizon’s chief technology officer, said in a statement. “The move to staying at home has reignited people’s hunger to stay connected, voice to voice.”

The surge in voice calls is for both business and personal purposes, said Chris Sambar, AT&T’s executive vice president of technology and operations. Before the spread of the coronavirus led to stay-at-home orders, wireless calls typically peaked in the morning and evening rush hours. Once people got to their offices and schools, the call volumes fell.

Now, he said, voice calls are high throughout the day. While Zoom and Google Hangouts are a popular replacement for meetings with multiple colleagues, the phone is easier for one-on-one conversations and doesn’t buffer and break down like video. On weekends, phone traffic is also much higher than normal.

He added that AT&T and other phone providers had experienced hiccups in their networks with increased voice call volumes, but had made upgrades to calling connection points and were able to handle the new demand.

Even young adults who grew up with texting and messaging apps as a primary form of communication are embracing voice calls.

Emily Lancia, 20, a college student, said she now called her parents daily instead of weekly from the campus of the State University of New York at Binghamton. Walking on the campus nature preserve one day this week, she was inspired to ring her best friend from childhood, whom she texts with almost daily but has never called.

“It was nice to hear her voice,” said Ms. Lancia, a junior.

Heading into spring break, Ms. Lancia said she was comforted by the voices of family and friends. That was especially true, she said, of her dad’s deep guttural laugh and what has become his quotidian phone greeting: “What’s up, peanut? What have you done for the last 12 hours?”