The reductions for May and June were smaller than some investors and analysts had expected, and oil prices gave up earlier gains. 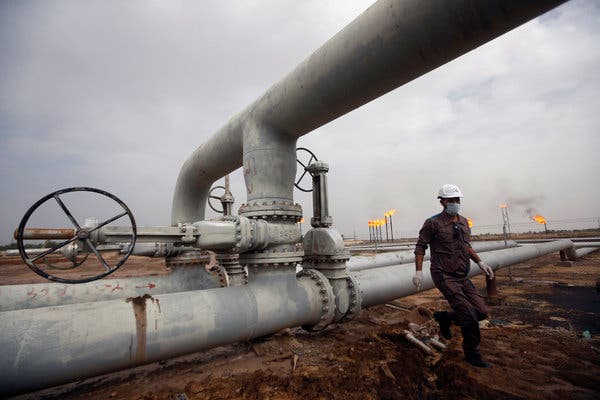 The cut agreed to by OPEC members and Russia amounts to about 23 percent of their own production, and 10 percent of normal worldwide production.Credit…Essam Al-Sudani/Reuters

The Organization of the Petroleum Exporting Countries, Russia and other countries reached a tentative agreement on Thursday to temporarily cut production.

OPEC and the other oil-producing countries agreed to cut 10 million barrels a day — about 23 percent of their production levels — in May and June, they said in a statement on Friday. Possible further trims could come from a meeting of the Group of 20 nations on Friday.

Negotiations hit a snag late Thursday over Mexico’s reluctance to cut its share of oil, reportedly 400,000 barrels a day, leaving the deal in limbo. In the statement, the group said the deal was conditional on Mexico’s consent.

Even before that happened, oil prices fell because analysts and traders had hoped for a bigger reduction to prevent the buildup of a glut of oil. On Thursday afternoon, the West Texas Intermediate crude future contract, the American benchmark, was down more than 7 percent to $23.28 a barrel.

Amrita Sen, chief oil analyst at Energy Aspects, a research firm, said markets would not be impressed by the deal.

“In a nutshell, the demand declines are going to be greater than the production declines,” said Ms. Sen. She estimated that demand would be down 25 million barrels a day, or about one-quarter of normal consumption, in April.

In addition, the new cuts won’t begin until May, allowing oil supplies to increase. There are also doubts about whether some of the countries party to the cuts, like Iraq, which often produces whatever it can, will really observe them. Ms. Sen said that OPEC and its collaborators were largely doing what they would be forced to do anyway.

“With the sharp decline in demand,” global producers will be forced shut down some production “because we will run out of storage space, “ she said. “OPEC-plus is simply codifying what they would have had to cut anyway.”

Still, the meeting appears to be at least a start at tackling the most serious problem the oil industry and OPEC countries have encountered in decades. The decision to cut might go some way toward assuaging growing tensions between members of the cartel and the United States.

Mr. Trump said Thursday afternoon that he thought the oil cartel would soon reach a deal, noting that he had just spoken to President Vladimir Putin of Russia and King Salman of Saudi Arabia. He said it was in the interest of all oil-producing countries, including the United States, to rein in production.

“The numbers are so low that there will be layoffs all over the world,” Mr. Trump said at a White House news conference, in an apparent reference to oil prices. “There will be certainly layoffs in this country, and we don’t want that to happen.”

The Saudis have been engaged in a price war with Russia after Moscow refused to go along with a Saudi proposal in early March to trim output to address a sharp drop in demand because of the coronavirus pandemic. The spat threatens to swamp oil markets, including those in the United States, with excessive supplies of crude.

OPEC’s secretary general, Mohammad Barkindo, acknowledged in his introductory remarks that the glut of oil had put his organization in a weak position. The Saudis, for instance, have loaded huge volumes of crude onto tankers but are said to be having trouble finding buyers for all the oil.

“Our industry is hemorrhaging; no one has been able to stem the bleeding,” he said, according to text of his remarks posted on the OPEC website. “It is imperative we take urgent action.”

Some producers in the United States also face difficulty selling and storing oil. Analysts from Wood Mackenzie, a research firm, said during a webinar on Thursday that storage tanks at Cushing, Okla., probably the most important such location in the United States, were filling at record speeds, putting pressure on prices.

With the industry in the United States threatened with job losses and bankruptcies, the Trump administration has been pushing the Saudis and Russians to cut. In an interview Thursday on CNBC, the energy secretary, Dan Brouillette, said that OPEC and its allies “can easily get to 10 million, perhaps even higher, and certainly higher if you include the other nations that produce oil, nations like Canada, Brazil, others.”

The U.S. oil industry and the Trump administration have so far brushed off the idea of engaging in coordinated cuts with OPEC and Russia, but American producers are already contributing to production trims. Mr. Brouilette said that the steep fall in demand because of the pandemic would lead to a reduction of production in the United States of two million barrels a day by the end of the year. With storage space “running out, at some point everyone is going to cut production,” he said.