With businesses and commercial activity all but shut down, there are fewer people outdoors, making the streets easier to police and less likely to be zones of criminal opportunity and conflict. 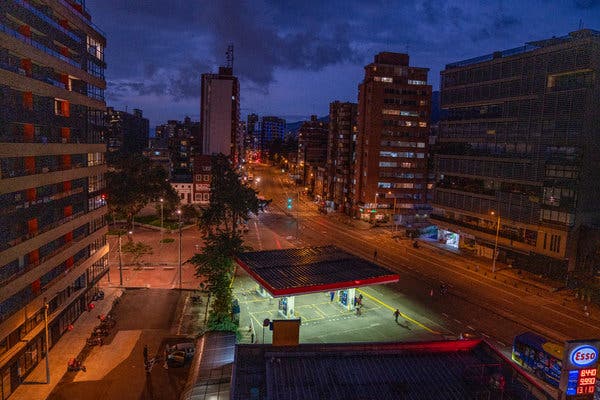 Empty streets in Colombia, which has been under a nationwide lockdown since March 20.Credit…Federico Rios for The New York Times

MEXICO CITY — In El Salvador, the number of murders plunged by nearly half between February and March. Neighboring Honduras has also seen a falloff in killings in recent weeks, as has Colombia and the most populous state in Mexico.

As nations around the world contend with a growing number of fatalities caused by the coronavirus, some are simultaneously experiencing an unanticipated — and welcome — decline in a different form of death: murder.

Governments around the world have imposed travel restrictions, curfews and quarantines to help control the spread of the virus, and by doing so they have also inadvertently lowered criminality and violence — for the moment, at least.

The trend has been particularly notable in Latin America, the region with the highest homicide rates in the world outside of war.

“It’s taking people off the streets,” Alejandro Hope, a security analyst in Mexico City, said of the pandemic and governments’ efforts to combat it. “The rule of thumb is: the stricter the lockdown, the bigger the effect on crimes committed against strangers on the street.”

In addition, analysts say, not only have the lockdowns led to fewer opportunities for crime — like extortion, muggings and even murder — but the virus has even taken some criminals out of action as they, too, hunker down in their homes, wary of infection. In several places, criminal gangs have even led efforts to impose curfews in neighborhoods and regions where they hold sway.

El Salvador began its coronavirus lockdown before almost any of its neighbors, closing its borders in mid-March, and shutting down schools and many businesses. On March 22, the government ordered all Salvadorans to remain quarantined in their homes; people caught in the street without the proper permissions were sent to quarantine centers.

The measures have helped lead to drops in homicides in recent weeks. There were just 65 homicides in March, or an average of about two a day, down from 114, or nearly four a day, in February. On four days in March as well as on Monday, there were zero recorded murders.

“We are in a pandemic and our priority is to fight against it, but today many lives were saved,” the president, Nayib Bukele, said on Twitter, hailing the achievement.

The government has mostly attributed the recent decrease to its security strategies, which it started to implement in June 2019 when Mr. Bukele took office. But experts say the stringent measures intended to compel people to stay home to curb the outbreak has helped to push the numbers far lower.

With businesses and commercial activity all but shut down, they say, there are simply fewer people outdoors, making the streets easier to police and less likely to be zones of criminal opportunity and conflict.

“One hundred percent of the police are dedicated to social control to combat the epidemic,” said Paolo Luers, a prominent columnist in El Salvador. “Even the soldiers. The crime has less space to exist.”

In Honduras, where the government has severely restricted movement and imposed a curfew, stores are now shuttered, streets are empty and the police are arresting people caught driving or hanging around outside in violation of the lockdown. Between March 30 and April 3, more than 2,000 people were detained for violating government orders to remain inside, the police said.

Since mid-March, when Argentines were asked to stay at home, robberies have fallen by nearly 90 percent in the capital, dropping from an average of 225 per day to 30.

“There is less circulation of people and money in the streets,” said Sabina Frederic, the security minister in Argentina, where the police have also enforced strict quarantine rules. “Strong controls that are being carried out by the police discourage any kind of illicit activity.”

Renato Sérgio de Lima, the director of the Brazilian Forum of Public Security, an organization that studies public safety trends, said that muggings and other forms of routine crime have dropped in several states in the country.

In Colombia, reports of many types of crimes plummeted following the president’s decision to declare a nationwide quarantine beginning the week of March 20. The country had 91 reported homicides between March 20 and 25, compared with 206 during the same period the year before. Assaults fell to 283, from 2,046 the year before, and robberies dropped to 486, from 5,045.

The statistics, however, do not mean that violence in the country has ceased. In the countryside, war continues. Colombia is home to a swirl of armed groups, many of which are involved in drug production and trafficking. Some of them see the shuttering of businesses and borders as a threat to their revenue streams.

Local leaders who speak out against these armed groups have come under attack, and killings of social leaders have gone on even as the virus spreads and families struggle to deal with lost jobs and increasingly limited food supplies.

The United Nations secretary general, António Guterres, has called on armed groups to declare a cease-fire amid the health crisis, with limited success. In late March, the rebel group known as the National Liberation Army, declared a one-month cease-fire in Colombia while the country grappled with the virus. But many others have not followed suit.

In Venezuela, a monthlong national lockdown has led to a reduction in homicides and other violent crime, but has also been accompanied by a surge in extrajudicial killings by government security forces, said Roberto Briceno León, head of Venezuelan Violence Observatory, a nonprofit monitoring group.

“The delinquents have retreated and the police have carried on their operations,” Mr. Briceno León said.

And the crime-fighting benefits of the lockdowns have barely started to register in Mexico, a nation with a highly complex criminal landscape. In March, the government recorded 2,585 homicides, one of the highest monthly totals on record.

But the administration of President Andrés Manuel López Obrador had also been slower than many other countries in the region to impose measures to combat the spread of the virus. His government waited until late March to issue stay-at-home orders and also made them voluntary. In some neighborhoods of the nation’s largest cities, life has continued more or less as normal.

Still, there is evidence that the measures have begun to put a dent in Mexican crime.

Maribel Cervantes Guerrero, the secretary of public security for the state of Mexico, the country’s largest state, said that since the government launched its stay-at-home campaign, officials have seen a decrease in most crimes, including homicides, which fell to 42 last week from 74 the week prior.

“That is simply because there are far less people in this highly populated area,” she said.

Security analysts and officials say that as the pandemic worsens in Mexico, with the contagion spreading and more people taking stay-at-home measures seriously, crime will most likely drop further as it has done in other countries.

But the longer the restrictive measures remain in place, analysts say, the more likely that certain crimes may start to rebound.

Eduardo Guerrero, a security analyst in Mexico City, predicted that, should the confinement measures persist beyond April, crimes like looting may begin to increase, “particularly in states with high levels of poverty where local officials have not been able to implement social programs to ease the economic impact of the pandemic.”

In Brazil, where closed borders have interrupted the supply chain of drug dealers, some areas have already seen an increase in robberies of cash machines and armored cars.

“Drug dealers are focusing their efforts on big robberies, so they can make money despite the effects of social isolation,” said Mr. de Lima of the Brazilian Forum of Public Security.

And officials throughout Latin America and around the world have grown concerned about a rise in domestic violence cases as lockdowns persist.

In Argentina, the government has urged women who are being abused by a partner to ask for a “red face mask” at a pharmacy, a coded message that is meant to prompt a call to the authorities.

In Brazil, reports of domestic violence increased by nine percent during the first few couple of weeks of lockdown measures compared to the same period last year. Officials said they’re considering sheltering some domestic abuse victims in hotels as long as coronavirus measures are in place.