An outbreak aboard an aircraft carrier has left local officials in Guam to contend with the arrival of hundreds of infected sailors, while they also try to protect the island’s population. 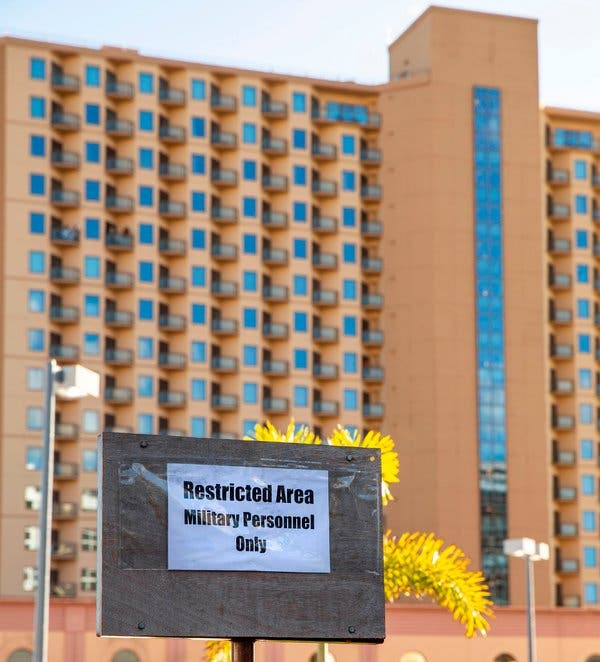 Sailors from the aircraft carrier Theodore Roosevelt, which had a coronavirus outbreak, are being housed at hotels in Guam.Credit…Tony Azios/Agence France-Presse — Getty Images

As the novel coronavirus spread through Asia in January and February, Lourdes Leon Guerrero saw an opportunity for her small island. The governor and her lieutenant appeared in a tourism advertisement promoting Guam as an “island paradise” that was “coronavirus free,” and the video was posted to the government’s official tourism website. “Warm weather and warm smiles are waiting for you here,” Leon Guerrero, who has governed Guam since January 2019, says to the camera.

It was an oasis with a short shelf life. By mid March, Guam’s beaches and public parks closed, its hotels were empty, and residents were ordered to stay home.

As a U.S. territory roughly 7,200 miles from the continental United States, Guam in many ways represents the edge of the American empire, one that happens to be on the front lines of the U.S. deterrence strategy against China. The 212-square-mile island is home to Joint Region Marianas, a military command made up of Andersen Air Force Base on the northern part of the island that supports stealth-bomber rotations, and Naval Base Guam to the south, where four attack submarines are stationed to counter Chinese military expansion in the South China Sea. It’s also now home to the U.S.S. Theodore Roosevelt, which arrived in Guam on March 27, and is not likely to redeploy anytime soon.

In interviews with The Times, locals, and Theodore Roosevelt sailors and their loved ones described a complicated situation in which the island is providing logistical support to the Navy while also trying to protect the local population from the coronavirus, which could quickly overwhelm Guam’s fragile health care system.

On March 14, Leon Guerrero declared a state of emergency across the island — shortly after President Trump did in the United States. Just 24 hours later, three people in Guam tested positive for the virus, including two who had traveled from Manila in late February. Across the island, schools and senior centers shut down. Beaches, parks and nonessential businesses closed. Travelers arriving from countries affected by the coronavirus were subject to a mandatory quarantine.

“I wasn’t shocked or surprised,” Leon Guerrero said about the first positive cases on the island. “I was expecting it based on what was happening in our part of the world. I was watching everything unfold in China, in South Korea and Japan.”

The government’s actions managed to prevent a widespread outbreak in the first few days. At the end of March, the island had fewer than 70 cases. While it seemed like Guam might be spared the devastation that was tearing through countries like Italy and Spain, Leon Guerrero was about to be drawn into a crisis that could completely change the situation.

Eleven days after issuing her emergency declaration, the governor received a call from Rear Adm. John Menoni, the commander of Joint Region Marianas. A handful of sailors on the aircraft carrier Theodore Roosevelt were being medevaced to U.S. Naval Hospital Guam.

A massive warship battling a fast-spreading outbreak among a crew of 4,800 was on its way to Guam, and Leon Guerrero had no authority to stop it. At first, the Navy told her it would keep the entire Theodore Roosevelt crew confined to the base. It soon became apparent that it would need much more room.

Strapped by the same problems facing health care workers around the world, including a limited supply of personal protective equipment, hospital beds and ventilators, Guam’s government now had to contend with how it would protect its own people and simultaneously support the Navy. “They’re the ones that are out there, protecting our waters,” Leon Guerrero said. With about two dozen Guam residents serving aboard the carrier, finding space was the “least we could do.”

When the Theodore Roosevelt arrived at Naval Base Guam, it brought not only a ship full of sick crew members, but a brewing political scandal. The ship’s commander, Capt. Brett E. Crozier, emailed a letter dated March 30 to at least 20 Navy officials about the Navy’s failures to support the aircraft carrier’s efforts to contain the outbreak, and it quickly leaked to the press. The controversy led to the swift removal of Crozier from command, followed by an impromptu trip to the Theodore Roosevelt by acting Navy secretary Thomas B. Modly, who gave a 15-minute speech to the ship’s crew during which he referred to Crozier as “naïve or stupid.” By the end of the week, Modly had resigned after his remarks prompted backlash from lawmakers, retired military leaders and the rank and file.

All the while, the carrier’s reported coronavirus cases have continued to climb. As of Friday, there were 447 infected sailors, one of whom is Crozier himself. A sailor who had been in isolation was admitted to intensive care at the base hospital on Thursday after he was found unresponsive.

If the number of sailors who require hospitalization grows, the base could quickly run out of space to provide proper treatment. Naval Hospital Guam has six I.C.U. beds and at least 15 ventilators, according to the Navy. An additional 12 acute care beds and six critical care beds with ventilators were added in the past two weeks. On base, the elementary and secondary schools, the gym, the Navy Lodge and some older barracks have been converted to housing for sick sailors. About 230 sailors and Marines from a Japan-based medical battalion arrived on the island earlier this week to help the Navy’s medical staff test and treat sailors.

The Navy is in the process of testing every sailor on board, with results taking up to 96 hours. On Friday, a 20-year-old sailor who had been tested a few days earlier was still awaiting her results. For now, she spends part of her day cleaning the ship, a task for which she is issued gloves and a mask. With so many members of the crew off the boat, social distancing is easier. But her worries about her own test results are compounded by the concern she has for her family in New York, the current epicenter of the virus, and for her shipmates, including her former captain, who has become a symbol of strength for the crew.

“I’m angry, tired, exhausted,” she told The Times. “I just wanna give up. I’m hurting for myself, my friends, family, shipmates. I want the world to know how strong the U.S.S. Theodore Roosevelt is.”

Sailors who test negative are being moved to hotels off base that stood largely vacant after tourists left the island. Once they arrive, they are not allowed to leave. Mary Rhodes, the president of the Guam Hotel and Restaurant Association who has been helping the Navy move sailors from the base to the hotels, described a lockdown scenario. Sailors are guarded by military police. They are given enough linens to last two weeks, and have access to wireless internet. They may receive laundry service once a week and receive mail, which is subject to inspection. They are allowed to go outside on balconies, but they do not have keys to their doors, which lock behind them.

That’s part of the agreement Leon Guerrero said she struck with the Navy. To protect its own population and health care system — which includes one private and one public hospital — the carrier’s sailors are to have no contact with civilians. “I made it very adamant that sailors are not to go to the beaches, they are not to go outside,” Leon Guerrero said. “So far they are complying.”

The Navy has assured Leon Guerrero that its presence will not hurt Guam’s health care system, she said, adding that the service has helped with testing and supplies and has delivered 35 additional ventilators to the island.

Outside the base’s perimeter, residents are preparing for the possibility that their own outbreak could overwhelm local resources. As of Friday, Guam had a total of 130 cases of the coronavirus, including four deaths. The hospitals have been able to manage the flow of patients so far, but the island could require as many as 6,000 hospital beds by June, according to Dr. Felix Cabrera, a member of Leon Guerrero’s physician’s advisory group.

The island has only 75 beds available for coronavirus patients, the governor’s office said. Officials hoped to free up 26 more beds by next week, once patients who did not have the virus were relocated. The Federal Emergency Management Agency recently delivered another 100 beds, and officials are looking for a location to set them up.

The island needs more protective gear, including N95 masks, said Dr. Thomas Shieh, who leads the nonprofit advocacy Guam Medical Association. “The struggle for supplies is real,” said Shieh, a former naval officer who spent four years at the base hospital before going into private practice.

Like in much of the rest of the world, there’s fear of community transmission, said Glynis Almonte, a retired nurse who worked at the public hospital and now volunteers with the island’s nursing association. “Our leaders, our medical experts, they’re trying their best to consolidate their efforts to fight this threat of the virus,” Almonte said, adding that the island already has a nursing shortage and school nurses are helping out in hospitals. “We’re just praying,” she added.

Back in the United States, the families of the Theodore Roosevelt’s crew are left feeling hopeless, as their loved ones report back about what’s happening. The mother of a 19-year-old sailor who tested positive said her son was moved to an on-base apartment with other infected crew members. She said he was sick for about five days on the ship before it arrived in Guam. As more and more sailors became ill, the crew was forced to jostle for space. Her son told her so many of the crew’s cooks were getting sick that meals became less frequent. “People were waiting in line for a couple hours for food,” the mother said.

In housing on the base, food continues to be a problem. The first night, the sailors received two two-piece meals of chicken and mashed potatoes. “There were four men sick who had to share those two meals for dinner,” she said. “When you’re sick, you need food.”

For the next several weeks, all that the Guam residents and sailors can do is sit in their respective homes or hotel rooms and wait. A small crew remains on the carrier doing a deep clean. As sailors complete off-base quarantines, they will move back on board, the Navy said.

The intent is to get the Theodore Roosevelt back out on deployment with a “healthy crew,” Lt. j.g. Rachel McMarr, a spokeswoman for the U.S. Pacific Fleet, said Thursday.

“That boat’s going back on patrol eventually.”

If you’re part of the military community and want to tell the At War team how the military’s efforts to contain the coronavirus are affecting you, email us at atwar@nytimes.com or visit The Times’s Tips page.