A conspiracy theory linking the spread of the coronavirus to 5G wireless technology has spurred more than 100 incidents this month, British officials said. 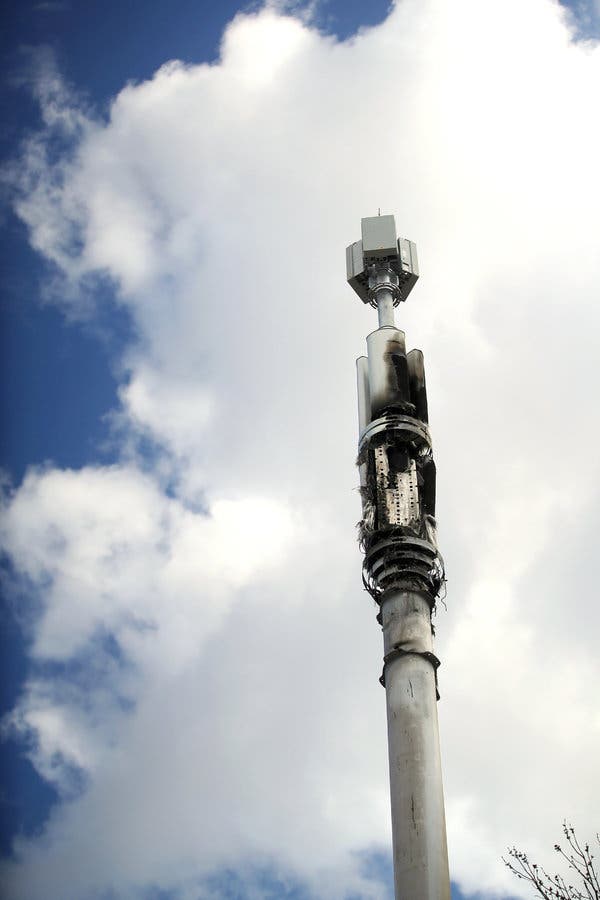 A telecom tower damaged by fire this month in Birmingham, England.Credit…Carl Recine/Reuters

LONDON — On April 2, a wireless tower was set ablaze in Birmingham. The next day, a fire was reported at 10 p.m. at a telecommunications box in Liverpool. An hour later, an emergency call came in about another cell tower in Liverpool that was going up in flames.

Across Britain, more than 30 acts of arson and vandalism have taken place against wireless towers and other telecom gear this month, according to police reports and a telecom trade group. In roughly 80 other incidents in the country, telecom technicians have been harassed on the job.

The attacks were fueled by the same cause, government officials said: an internet conspiracy theory that links the spread of the coronavirus to an ultrafast wireless technology known as 5G. Under the false idea, which has gained momentum in Facebook groups, WhatsApp messages and YouTube videos, radio waves sent by 5G technology are causing small changes to people’s bodies that make them succumb to the virus.

The incidents starkly demonstrate how coronavirus conspiracy theories have taken a dark turn by spilling out into the real world. In just a few weeks, the pandemic has given pre-existing fringe ideas online new urgency by playing on people’s fears.

Before the coronavirus, rarely did such theories cause as much tangible harm so quickly, disinformation researchers said.

In the United States, one person died after self-medicating with chloroquine, which was touted online as a miracle cure for the coronavirus even though its efficacy is unproven. And Dr. Anthony S. Fauci, the head of the U.S. National Institute of Allergy and Infectious Diseases, was assigned more security this month after unfounded theories spread that he was part of a secret cabal working to undermine President Trump.

“Most conspiracies stay online, but this is having real-world impact,” said Alexandre Alaphilippe, executive director of the E.U. DisinfoLab, a Brussels-based group tracking virus conspiracy theories. He called managing pandemic misinformation “a new problem” because the disease is global and people everywhere are hunting for information.

The false theory linking 5G to the coronavirus has been especially prominent, amplified by celebrities like John Cusack and Woody Harrelson on social media. It has also been stoked by a vocal anti-5G contingent, who have urged people to take action against telecom gear to protect themselves.

The idea has deep internet roots. An analysis by The New York Times found 487 Facebook communities, 84 Instagram accounts, 52 Twitter accounts, and dozens of other posts and videos pushing the conspiracy. The Facebook communities added nearly half a million new followers over the past two weeks. On Instagram, a network of 40 accounts nearly doubled its audience this month to 58,800 followers.

On YouTube, the 10 most popular 5G coronavirus conspiracy videos posted in March were viewed over 5.8 million times. Today, the conspiracy can be found on Facebook in over 30 countries, including Switzerland, Uruguay and Japan.

British politicians said the conspiracy theory and the violent acts it was causing were unacceptable.

“This is nonsense of the absolute highest order,” said Julian Knight, a member of Parliament who leads a committee investigating coronavirus-related online misinformation. He said Facebook and YouTube needed to “get a grip” on the situation or risk undermining the crisis response.

Mr. Knight added that the spread of 5G conspiracies raised alarms about how information about a future coronavirus vaccine would be disseminated.

“If we were to get a vaccine for Covid-19, can we trust the social media companies to ensure that the right public health messages are put out about that vaccine?” he asked. “That could be a question of life and death for many people.”

Facebook, which also owns Instagram and WhatsApp, said it was “starting to remove false claims that 5G technology causes the symptoms of or contraction of Covid-19.” YouTube said it would reduce recommendations of videos linking the coronavirus to 5G, while Twitter said it had taken action against misleading and harmful content about the illness.

Wild claims about 5G are not new. The technology has an outsize political importance because it may provide countries with a competitive edge, with faster wireless speeds enabling more rapid development of driverless cars and other innovations.

Internet trolls have seized on 5G and its political implications to sow fear, leading to protests in the United States and elsewhere against the technology in recent years. Russians have pushed claims that 5G signals were linked to brain cancer, infertility, autism, heart tumors and Alzheimer’s disease, all of which lacked scientific support.

In January, as the coronavirus rippled through Wuhan, China, and beyond, it provided new fodder for anti-5G trolls. On Jan. 19, a post on Twitter speculated on a link between 5G and the disease, according to Zignal Labs, a media insights company that studied 699,000 mentions of the conspiracy this year through April 7.

On Jan. 22, an article on a Belgium news website included a comment from a physician claiming that 5G was harmful to people’s health. Though it did not specifically mention the coronavirus, the doctor mentioned a possible “link with current events.” The article, later deleted by the publisher, reached as many as 115,000 people, according to CrowdTangle, a tool that analyzes interactions across social media.

By last month, 5G-coronavirus claims on the web and television were rising, according to Zignal Labs. A YouTube video that connected the virus to 5G last month racked up roughly two million views before the site deleted it. And the singer Keri Hilson, as well as Mr. Harrelson and Mr. Cusack, posted online about the conspiracy.

“A lot of my friends have been talking about the negative effects of 5G,” Mr. Harrelson wrote on Instagram to his two million followers last week, sharing a screenshot of an article that drew links between the outbreak in Wuhan and 5G development there.

Representatives for Mr. Harrelson and Mr. Cusack, whose 5G posts have since been deleted, declined to comment. Ms. Hilson’s manager said her posts had been removed because “we feel that at this time it is important to focus on the things that we know are 100 percent accurate.”

The conspiracy particularly resonated in Britain. In January, Prime Minister Boris Johnson had given the Chinese technology company Huawei permission to set up 5G infrastructure in the country.

In recent weeks, conspiracy theorists began saying China’s lack of transparency on Covid-19 was evidence that Huawei should not be trusted to install 5G in Britain. Some went further and called for the destruction of wireless equipment.

After the British government issued shelter-in-place orders on March 23, some conspiracy theorists commented that it was a trick to secretly build 5G masts out of public view.

On April 2, in one of the first 5G-coronavirus incidents, telecom equipment in a neighborhood of Belfast in Northern Ireland was set ablaze, according to local officials.

“I just couldn’t believe it,” said Carl Whyte, a Belfast City Council member. “They are seeing these conspiracy theories on social media and going out and destroying those masts.”

Word of the fire spread around the Belfast area. Richard Kerr, the minister at Templepatrick Presbyterian Church in nearby Ballyclare, said, “I was taken aback that it went to that level that people were prepared to commit arson.”

Other fires of telecom towers followed in Birmingham, Liverpool and elsewhere. Videos of burning equipment were shared and celebrated on Facebook. Some videos also showed telecom technicians being harassed.

“You know when they turn this on it’s going to kill everyone,” a woman said of 5G in a recent video on Twitter, as she confronted technicians laying fiber-optic cables in an unidentified British town.

Mark Steele, a prominent anti-5G activist in Britain, said the fires were a result of people being frustrated that their safety concerns weren’t taken seriously. Asked if he believed 5G was causing coronavirus, he said, “It’s looking a bit suspicious, don’t you think?”

Telecommunications companies, which have added more security and are working with law enforcement, said the attacks against their workers and equipment had been widespread, threatening communication networks during the crisis. Vodafone said it had experienced at least 15 incidents, while BT has had at least 11. The companies said that in many cases, vandals had damaged existing infrastructure and not new 5G gear.

The police in Belfast, Liverpool and Birmingham said they were continuing to investigate the incidents, reviewing security-camera footage and asking the public for leads.

Anti-5G groups have continued adding hundreds of members. One Facebook user shared photos this week of a wireless tower being constructed in an unidentified area of Britain.

“Light it up,” one commenter responded.