Daily briefings by public health officers across the country have turned them into celebrities and prompted songs, T-shirts, street art and fan clubs.

This week I had the opportunity speak to Dr. Bonnie Henry. Before coronavirus and Covid-19 had entered my vocabulary, I had never heard of British Columbia’s provincial health officer.

Now, it feels like she has become one of the most famous and beloved people in Canada. 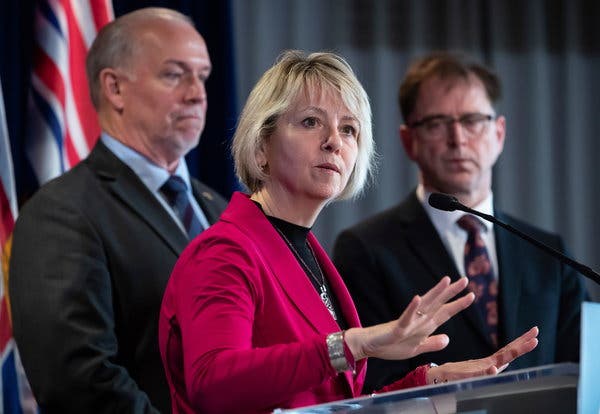 She has inspired fan clubs, musical tributes, T-shirts and street art. Musician and lawyer Phil Dwyer wrote a ballad about her that his friends and son helped him record and mix remotely. Two days after it was uploaded to SoundCloud, the song had been listened to 20,000 times.

“We all share this person who comes and talks to us every day. The interesting thing is she is delivering, for the most part, really awful news: more people sick, more people dead, more people going to die. But somehow, the way she does it and the level of empathy she shows, it just seems like she is the right person for us at this time,” Mr. Dwyer, who lives on Vancouver Island, told me. “She is who we needed.”

Dr. Henry is not alone. Public health officials across Canada have become veritable folk heroes. In Quebec, Dr. Horacio Arruda’s animated face has appeared on loaves of bread, coffee cups, coloring books, windows and tattoo designs. After he announced he planned to spend the weekend inside, baking Portuguese tarts, his local fan club hosted two Facebook live session on “how to bake natas.”

In Calgary, clothing designers hooked up with a local artist to make 1,100 T-shirts featuring the face of Dr. Deena Hinshaw, Alberta’s Chief Medical Officer of Health, and three other newly famous female health officers. They quickly sold out. “She’s someone we trust, because there is no political layer,” said Emma May, a designer on the project who normally makes women’s business attire. “She has no agenda. Her agenda is science.”

The public health doctor as hero phenomenon is not unique to Canada but it’s certainly pronounced here. It’s a particular contrast to the polarized reception Dr. Anthony Fauci has faced across the border. There, the head of the National Institute of Allergy and Infectious Disease has garnered devout fans but also so many public enemies he’s had to beef up his personal security.

I called a few people to get their take on why this was happening.

Josh Greenberg, a professor of communication who focuses on public health at Carleton University in Ottawa, said that Canada’s public health doctors were filling a void created by “preening” celebrities.

“Ordinary people don’t have time for celebrity peacocks when the world is burning,” he said. “There is a void created because there is so much mistrust in politicians, mistrust in traditional institutions like journalism, that we go to these figures who were largely up until now backstage players and we are putting them onstage by making them celebrities,” he said.

Jeremy Frimer is an associate professor of psychology at the University of Winnipeg who studies moral heroes. He told me that whether consciously done or not, the creation of moral heroes during times like these is an “advantageous social strategy.” They lead by example, convincing rule breakers to fall in line.

“They mobilize the masses to do their part,” he told me. “That’s the difference between social distancing and washing our hands and not.”

There is something both intimate and collective about the role they play right now, speaking directly to each of us from the television or livestream.

They are also very relatable. This week, Dr. Henry admitted during her regular update that she had been forced to cut her hair herself.

Dr. Henry told me the surge of adulation has been “scary, embarrassing almost” and “really, really touching.”

“I’m an introvert — it’s not my nature to be the face of things,” she said from her office in Victoria where she’s received flowers, home-baked cookies and cards.

“In doing our jobs as best we can most of the time, you don’t see us, because there aren’t major outbreaks,” she said, adding: “We are doing things like putting in no smoking bylaws.”

She told me that she came by her calm delivery — lauded by many as anxiety reducing — naturally. Her first job as a physician was in the Navy, where she worked on a ship in Esquimalt. “I remember basic training,” she said, “I was criticized because I don’t yell loud enough.”

She has deep experience working in epidemics, from contact tracing ebola patients in Uganda in the early 2000s to helping quarterback Toronto’s response to SARS in 2003.

“I’ve been working in outbreaks around world for 30 years,” said Dr. Henry, 54. “I never ever thought we’d be in pandemic like this.”

The day she decided schools would have to close, she said she was in shock.

How are we doing?

We’re eager to have your thoughts about this newsletter and events in Canada in general. Please send them to nytcanada@nytimes.com.

Forward it to your friends, and let them know they can sign up here.