Dario Gabbai, a Final Witness to Auschwitz, Is Dead at 97 – HumanRelations.org

He was among the last Sonderkommandos, prisoners forced by the Nazis to herd fellow inmates into the gas chambers. 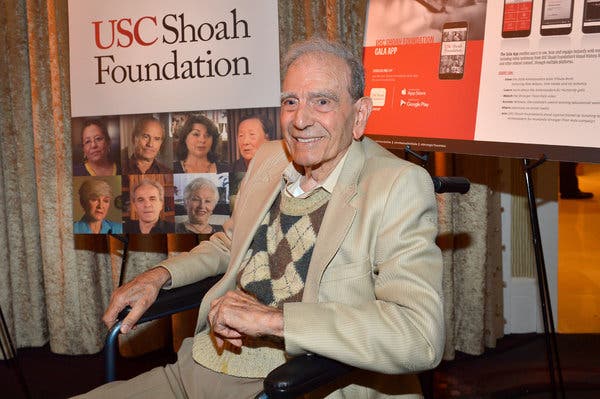 Dario Gabbai at a gala benefitting the USC Shoah Foundation in Beverly Hills in 2018. Recalling his memories of the Holocaust, he once asked, “How can you have peace of mind?”Credit…Donato Sardella/Getty Images

Of all the jobs that Jewish slave laborers had to perform at the Auschwitz-Birkenau concentration camp in Poland, none perhaps was more despised than that of Sonderkommando — a member of the “special unit” that instructed men, women and children to undress for the gas chambers, and dragged their bodies to the crematories.

For almost three years, 2,000 Sonderkommandos did such work under threat of execution, while often incurring the contempt of fellow prisoners. Some even had to dispose of the corpses of their relatives and neighbors.

Because the Germans replaced Sonderkommandos every six months, only a hundred or so survived the war. They were eyewitnesses to the exterminations that Holocaust deniers challenge. The man who may have been the last of the Sonderkommandos, and who was certainly one of the most prominent, has now died.

Dario Gabbai, a Greek Jew who settled in California after the war and described the grim work he did in a handful of Holocaust documentaries — including “The Last Days,” which won an Academy Award for best documentary in 1999 — died on March 25 at a residence in Los Angeles. He was 97.

Michael Berenbaum, a Holocaust scholar and a friend, confirmed the death.

Though he was known for his debonair appearance — he went to the gym regularly and drove a dark Mustang convertible — Mr. Gabbai was haunted by his work in Auschwitz for the rest of his life.

“In seeing the mass of people coming in and out day after day, butchered and gassed, and we did the work, how can you have peace of mind?” he asked in another documentary, “Auschwitz: The Final Witness” (2000). “No matter how our appearances are, inside us there is somebody else.”

David Dario Gabbai (pronounced gab-EYE) was born on Sept. 2, 1922, in Thessaloniki, a city in northern Greece that had an ancient and vibrant community of 50,000 Sephardic Jews. (They called the city by its Ladino name, Salonika.) So essential was the Jewish population that the city’s port was closed on the Sabbath.

His parents, Victor and Rosa Beraha Gabbai, had four children. They sent Dario to an Italian-themed school (his father, a newspaper typographer, was from Italy) and gave him clarinet lessons.

Germany invaded Greece in the spring of 1941 and in February 1943 confined the Jews to two ghettos. Deportations to Auschwitz began shortly after. Mr. Gabbai and his family were among the last rounded up and, in April 1944, were sent on an 11-day journey crammed in cattle cars with little food and no toilet.

Upon arrival at Auschwitz, Dario saw his father, mother and youngest brother dispatched to the gas chambers. (A sister had died as an infant, before Auschwitz.) Athletic and muscular at 21, he was selected, along with his older brother, Jakob, as Sonderkommandos at nearby Birkenau.

Soon he was disposing of the corpses of newly arrived Hungarian Jews. More than 6,000 were killed each day, according to Mr. Berenbaum, a professor of Jewish studies at American Jewish University in Los Angeles.

In the few minutes that the gas chamber doors were locked, Mr. Gabbai could hear the hundreds of women and children screaming, crying and scratching the walls in desperate efforts to breathe. When the doors opened, he and other Sonderkommandos had to climb over bodies piled five and six feet high to harvest glasses, gold teeth and prosthetic limbs, before hauling out the corpses and washing down floors and walls covered in blood and excrement.

Mr. Gabbai also recalled being handed scissors and ordered to cut the hair off the women, so it could be used to make blankets and socks for German soldiers. When a sound emerged from a corpse, he said, he was so sickened that he said to himself, “Where is God?”

“I saw the people I just saw alive, the mother with the kids in their arms, some black and blue from the gas, dead,” Mr. Gabbai said. “I said to myself — my mind went blind, how can I survive in this environment?”

Mr. Gabbai and other Sonderkommandos would then drag the bodies to an elevator that would lift them one flight to the furnace floor. There was also a dissecting room, where jewels and other valuables hidden in body crevices would be removed. To endure such grim work, Mr. Gabbai told friends, he “shut down” and became an “automaton.”

For these tasks, the Germans preferred less common nationalities like Greek and Ladino-speaking Jews, because they could not easily communicate the precise details of the factorylike slaughter to Polish, Hungarian and other European inmates.

“They had seen too much and known too much,” Mr. Berenbaum said.

Being a Sonderkommando also had some benefits: They could scavenge foods left behind in the undressing rooms, and they got to sleep near the warmth of the crematories during bone-chilling winters.

As Allied forces approached Poland, the Nazis destroyed the crematories hoping to obliterate evidence of mass murder. They herded thousands of frail inmates at gunpoint on a death march along roads covered in deep snow, to trains that would carry them to still-functioning concentration camps in Germany and Austria. Hundreds died along the way.

Mr. Gabbai said he survived the march by dreaming of warm days in Greece, distracting himself so forcefully that he remembered sweating in the freezing cold. He wound up in a subcamp of the Mauthausen concentration camp in Austria. When it was liberated by the United States Army on May 6, 1945, he weighed less than 100 pounds.

He made his way to Athens, where he helped settle refugees for the American Jewish Joint Distribution Committee. In 1951, he immigrated to the United States through the sponsorship of the Jewish community of Cleveland, and two years later he departed for California — for “its beautiful beaches, beautiful women and sunshine,” he told Mr. Berenbaum.

He worked for Lensol Fabrics for 35 years, retiring as an executive, and spent a brief period acting in movies; he had a small role as a Greek soldier in the 1953 Korean War film “The Glory Brigade,” starring Victor Mature and Lee Marvin.

In the mid-1950s, he married Dana Mitzman (they divorced in the 1980s). They had a daughter, Rhoda, who survives him.

For the 2000 documentary “Auschwitz: The Final Witness,” Mr. Gabbai returned to the concentration camp with two cousins, Schlomo Venezia and Morris Venezia, who had also been Sonderkommandos. Near the ruins of the crematories, they recited the Kaddish, the Hebrew prayer for the dead.

They ended the visit at the Vistula River, where the Germans had dumped the ashes of those they murdered. It was as close as the three men could get to actual burial grounds for their family.