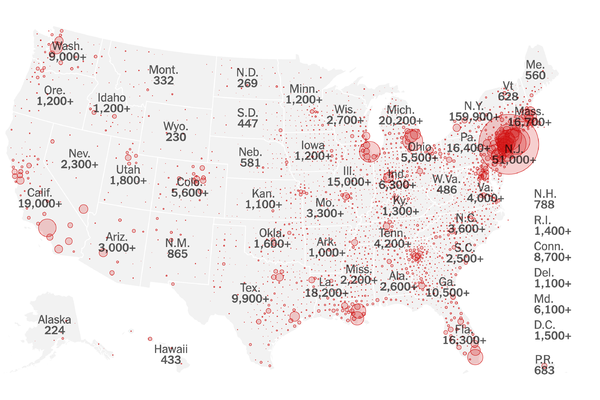 The economic toll of the coronavirus outbreak in the U.S. is mounting even faster than the case counts: Another 6.6 million people filed new claims for unemployment benefits last week. That puts the total for the three weeks of widespread shutdowns above 16 million — almost twice the net job losses for the entire 2007-9 recession.

It’s as if “the economy as a whole has fallen into some sudden black hole,” said Kathy Bostjancic, chief U.S. financial economist at Oxford Economics. And there’s no telling yet when it will hit bottom.

Washington’s big stimulus measures have yet to deliver much relief on Main Street, where the pain is already acute, especially among the four in 10 Americans who were living check to check with little or no savings.

To see the evidence, look at the nation’s food banks.

Demand for food assistance is skyrocketing, just when the food banks are coming up short of both provisions and volunteers. Many of the restaurants and other organizations that typically donate food have shut down. Grocery stores have less unsold inventory to give because panic buying has stripped their shelves.

Virus outbreaks in some hard-hit areas may now be passing their crests: Daily reports of new cases in Italy are way down, and the number of patients hospitalized in New York grew by just 1 percent on Thursday.

But in other places, the epidemic is on the upsurge.

The caseload in Pennsylvania has doubled in a week, to 16,000, with 300 deaths. Vice President Mike Pence said on Wednesday that Philadelphia had become “an area of particular concern.”

The virus is tearing across the Navajo Nation, the largest Native American reservation in the U.S., killing 20 people there so far — compared with 16 in all of New Mexico, with 13 times the population.

The virus is also taking hold in countries where poverty is more widespread than in the European and Asian nations where it struck first. Across Africa, more than 50 countries have now reported a total of 11,424 coronavirus cases and 572 deaths.

Officially, Ecuador has had 272 virus-related deaths through Thursday, but that may be an undercount. An official in Guayaquil said the government had been overwhelmed by the number of people dying there: 1,350 bodies collected from homes since late March, some left on doorsteps wrapped in plastic.

Manufacturers of test kits say they cannot fill orders from Africa or Latin America because the U.S. and Europe are taking almost all they can make.

Curious ripple effects of the pandemic

By profoundly disrupting modern life, the coronavirus is making itself felt in some novel ways.

The seismometers that geologists use to detect earthquakes also pick up the vibrations of human activity — vehicle traffic, construction equipment, heavy machinery and the like. But with billions of people now staying home, the “thumping pulse of civilization is now barely detectable,” Robin George Andrews, a volcanologist, writes.

A University of Chicago professor who developed a way to track electricity use as a measure of economic stability says he has seen a sharp falloff in recent weeks, suggesting an economic decline on a par with the 2007-9 recession, and possibly the Great Depression.

On the other hand, there has been a huge surge in plain old-fashioned phone calls. Voice calling had been dwindling for years, but Verizon says it is now handling twice as many calls on an average weekday as it usually gets on Mother’s Day.

What you can do

Get some sleep. Rest can boost your immune system and is one of the most effective ways to prepare your body to fight infection. We have some advice for how to sleep better.

Don’t intentionally infect yourself. Seriously. In light of rumblings about “coronavirus parties” where people try to catch the virus on purpose, hoping to become immune, an epidemiologist explains why that is a terrible idea.

Stop smoking and vaping. Tobacco and marijuana products damage lungs, where the virus does its harm. Here are lots of helpful resources for those ready to quit.

Make a plan for the kids. What will happen if parents of young children catch the virus? Here’s how to ensure that everyone stays safe and cared for.

‘The America We Need’

The Times’s Opinion desk, which operates independently from our newsroom, has started a new series exploring how the United States can emerge from the pandemic stronger, fairer and more free.

“The crucible of a crisis provides the opportunity to forge a better society, but the crisis itself does not do the work,” the Editorial Board writes in an introductory essay. “Crises expose problems, but they do not supply alternatives, let alone political will. Change requires ideas and leadership.”

What else we’re following

My daughter, her husband and my 5-year-old granddaughter live 600 miles away. My daughter is trying to work from home, but the kid is bored. I emailed her a “scavenger hunt” that my granddaughter can do, including things like, “something round, something yucky, something shaped like a star, something that starts with a ‘P.’” It encourages her to read and to be creative, and gives Mom a few uninterrupted minutes.

Let us know how you’re dealing with the outbreak. Send us a response here, and we may feature it in an upcoming newsletter.

Sign up here to get the briefing by email.