The fight to stop a deadly outbreak of Ebola in the Democratic Republic of Congo has lasted nearly two years. The lessons learned could now apply to combating the coronavirus. 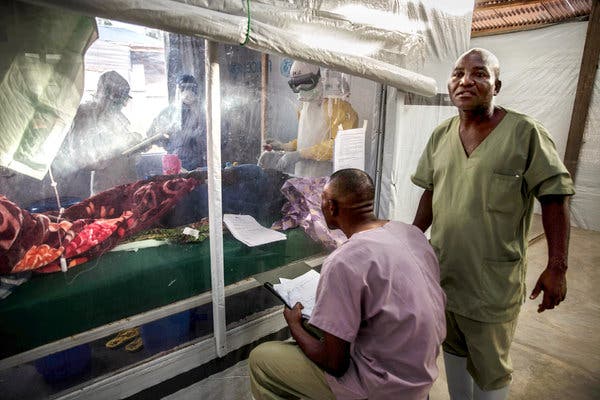 A critically ill Ebola patient inside an innovative treatment “cube” in the Democratic Republic of Congo.Credit…Finbarr O’Reilly for The New York Times

NAIROBI, Kenya — Health workers in lime-green scrubs and white gumboots danced, ululated and drummed on buckets in celebration as the woman they hoped would be the last patient treated for Ebola in the Democratic Republic of Congo was released from a treatment center there in early March.

Their fight to conquer the Ebola epidemic, which had seemed nearly hopeless only one year ago, appeared to be almost over. If the country could just make it to Sunday — the equivalent of two incubation periods — without any more cases emerging, then the world’s second-worst Ebola outbreak in history would officially be declared to have ended.

“I hope the disease leaves us forever,” that patient, Semida Masika Muhasu, a vegetable seller who lost a daughter to Ebola, said in a recent phone call from Beni, the city where she was treated in the country’s northeast.

But the celebrations are now on hold. On Friday, the World Health Organization announced that a new case of Ebola had been confirmed in Beni, just as health workers had already pivoted to respond to the arrival of the coronavirus in Congo.

For now, it’s only one new case. But the setback demonstrates just how hard it is to eradicate a virus. Now, while medical workers push to stop any further resurgence of Ebola, they must also combat a flare-up of the coronavirus in a country that has been wracked for years with instability and violence.

“This is now a triple emergency,” said Kate Moger, a regional vice president with the International Rescue Committee.

At best, if the newly discovered Ebola patient is discharged and no new cases emerge, Congo will now have to wait another two incubation periods — or 42 days — until the Ebola epidemic can be declared over.

Even with the setback, public health experts say the intensive campaign to defeat Ebola in Congo may offer some lessons for the world as it grapples with the coronavirus pandemic, though the viruses are very different and the coronavirus has spread far more widely.

The response to Ebola has been complicated by some of the same challenges now undermining the battle against Covid-19 elsewhere in the world. There have been feuds between government officials, lack of coordination among responding agencies and mistrust from some community members.

As the Ebola outbreak raged on for 19 months, new hot spots kept emerging, health care workers continued to die from the disease and tracking the sick to break transmission chains proved extremely difficult.

To combat Ebola in Congo, one of the world’s poorest nations, health workers are taking a multifaceted approach.

They have worked to win over communities that were sometimes uncooperative — even hostile.

They have drawn on technological innovations, notably a transparent enclosure known as the cube that allows medical workers to reach in and treat patients suffering from the contagious disease through plastic sleeves.

And they have used vaccines, developed relatively recently, which have made it possible to limit the spread of the epidemic.

Ebola, transmitted through contact with sick or dead people or animals, causes fever, bleeding, weakness and abdominal pain. Although it is less contagious than the coronavirus, Ebola kills about half of those it infects — a far higher rate than the coronavirus.

The current Ebola outbreak has infected 3,456 people and killed 2,276, most of them in Congo. It was designated a global health emergency last July, and was the worst Ebola epidemic since the one that began in West Africa in 2014, which ultimately infected 28,616 people and killed more than 11,000. 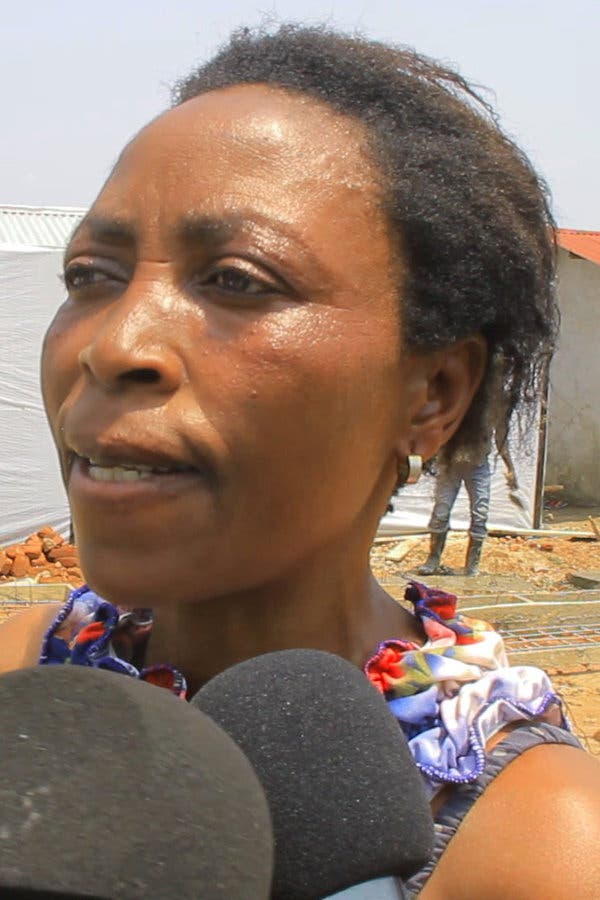 The World Health Organization recorded 420 attacks on health facilities, resulting in 11 deaths and 86 injuries since the outbreak began. Protests and violence over the country’s 2018 general elections also hindered efforts to combat the spread of the disease.

Insecurity was the “key reason why the outbreak carried on for so long,” said Matshidiso Rebecca Moeti, W.H.O.’s regional director for Africa.

Many of the local people learned long ago to be wary of the authorities, and of outsiders in general. Fighting and corruption have scarred Congo for decades, with various sides taking advantage of the anarchy to plunder natural resources.

Rumors and misinformation about Ebola were rife.

Some said they believed the disease didn’t exist. Others said that it had been imported for financial gain.

The conspiracy theories, coupled with the violence, thwarted efforts to trace the contacts of those infected, or even just provide vaccinations or treatment, said Trish Newport, who helped coordinate the response by the aid group Doctors Without Borders.

It “made you feel the outbreak was never going to finish,” she said.

Faced with the hostility, many organizations, including the W.H.O., shifted strategy and worked to build trust with local people, Ms. Newport said.

Doctors Without Borders began by building wells, making a point of involving traditional and religious leaders. It also constructed isolation units closer to villages, so that families could visit their loved ones. Over time, health workers saw a “huge reduction” in the number of Ebola cases, Ms. Newport said.

The “cube” was also a big trust builder.

With transparent walls and integrated plastic sleeves and gloves, the air-conditioned chambers allowed medical teams to tend to Ebola patients without having to put on cumbersome protective gear. The cubes also allowed patients and their family members to see each other without risk of infection.

People were afraid of the treatment centers, where so many had died. But the cubes won trust for the health care workers, said Augustin Augier, chief executive of the Alliance for International Medical Action, the nonprofit aid group that developed the chambers.

“We asked the community to come and visit so they could see what was actually happening,” Mr. Augier said.

At least 500 patients were fully treated in the cubes, which could be set up in 90 minutes and reused up to 10 times, Mr. Augier, said.

But the key factor in curbing the spread of Ebola was the introduction of powerful vaccines and lifesaving antiviral drugs.

In early November 2018, the W.H.O. accelerated the licensing and rollout of the injectable Ebola vaccine Ervebo, made by the American pharmaceutical company Merck. Preliminary study results showed a 97.5 percent efficacy rate, prompting Congo, along with Burundi, Ghana and Zambia, to license the vaccine for wider distribution.

Nearly 300,000 doses of the vaccine have been administered in Congo, said Dr. Moeti of the W.H.O.

Last September, authorities in Congo also started using a second vaccine, manufactured by Johnson & Johnson, as a way to extend protection. The vaccine was to be used in places where Ebola was a risk, but not being actively transmitted.

“Producing the vaccines and rolling them out under extremely trying conditions was one of the things that was done well in the Congo outbreak,” said Robert F. Garry Jr., co-director of the Center for Viral Systems Biology at Tulane University. “It was a major breakthrough.”

But the new treatments, lauded as a turning point in the decades-long fight against Ebola, were not without controversy.

Organizations like Doctors Without Borders accused W.H.O. of “rationing” and “restricting” their availability.

And Congo’s former health minister, Oly Ilunga Kalenga, opposed the introduction of the second vaccine, saying it was bound to confuse the populace because the doses were administered in two rounds almost two months apart.

Dr. Kalenga resigned last July, after clashing with President Félix Tshisekedi over the management of the Ebola response, and was arrested in September, accused of mismanaging Ebola funding.

The Ebola virus is a stubborn foe; it can persist in the body fluids of survivors and be transmitted well after recovery. And the disease could also show up in areas that are not being monitored because of security issues.

And then there is the mounting threat from the coronavirus pandemic.

A drain on resources caused by the coronavirus may put the battle against Ebola at risk. The W.H.O. says it is facing a funding gap of $20 million, and might not be able to tackle new Ebola flare-ups rapidly.

In March, the U.N.’s children agency said the Ebola response had already sapped the ability of Congo’s battered health care system to deal with other endemic diseases, including malaria, cholera and measles. Since 2019, the agency said, measles has infected 332,000 Congolese and killed 6,200 people, around 85 percent of whom were children under 5.

Dr. Moeti said some of the strategies used to tackle Ebola — partnering with the government, mobilizing communities, setting up laboratories and surveillance methods, encouraging hygiene — would be useful in fighting the coronavirus in Congo. So far, the country has 215 confirmed coronavirus cases and 20 deaths, according to the Africa Centers for Disease Control and Prevention.

But as the outbreak grows, some experts worry that resources will be spread too thin.

Already, Dr. Bausch said, some specialists that his group had called on to respond to Covid-19 overseas have declined.

“The days ahead for Congo may be very difficult,” he said.