The prime minister’s move from the I.C.U. to a ward in a London hospital offered a ray of hope for a country still reeling from the trauma of the coronavirus pandemic. 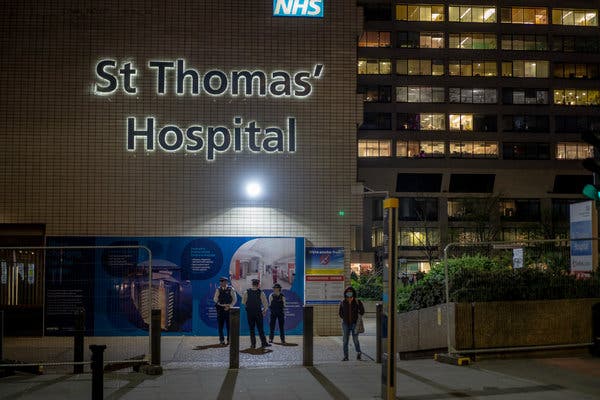 Police officers outside St Thomas’ Hospital in London, where Prime Minister Boris Johnson is being treated for coronavirus.Credit…Andrew Testa for The New York Times

LONDON — Prime Minister Boris Johnson of Britain was moved out of intensive care on Thursday, a ray of hope for a country that faces several more weeks under lockdown as its death toll from the coronavirus approached 8,000.

Mr. Johnson was hospitalized on Sunday evening after a 10-day bout with the virus and transferred to the intensive care unit on Monday after his condition deteriorated. On Thursday, Downing Street said the prime minister, 55, had been moved back to a ward at St. Thomas’ Hospital in London and was in “extremely good spirits.”

Dominic Raab, Britain’s caretaker leader, said that Mr. Johnson had made “positive steps” in his recovery, though he offered no timetable for when he might return to work. He also signaled that the government would extend the country’s lockdown beyond next week.

Mr. Raab, the foreign secretary deputized by Mr. Johnson to carry out his duties, said the government would not lift restrictions on April 13, the date the prime minister had set when he imposed the measures last month. The lockdown now appears likely to last several more weeks.

“Is it time to ease up on the rules?” Mr. Raab said to reporters at 10 Downing Street. “We’re not done yet. We’ve got to keep going.”

Mr. Raab said he had not spoken to Mr. Johnson since he was hospitalized on Sunday night. Now that he is out of intensive care, the prime minister “will receive close monitoring during the early phase of his recovery,” the government said in a statement.

Despite the good news, Mr. Raab appeared to be adjusting to the reality that Mr. Johnson will still be convalescing as the government faces one of the most sensitive decisions of the pandemic: when, and how, to reopen the British economy. The cabinet plans to make that assessment at the end of next week.

“We in the government have got this covered,” Mr. Raab said when asked whether he had the power to make that decision.

The debate over how to lift the lockdown is replete with trade-offs. Lifting it too soon, experts said, could reignite the contagion and force a new lockdown, which they said would shatter the confidence of businesses. But leaving it in place for too long could force many companies into insolvency and cause lasting damage.

Although the government put off the decision until next week, its hand has effectively been forced. Scotland’s first minister, Nicola Sturgeon, said on Thursday that the lockdown there was likely to continue “for some weeks to come,” with no prospect of the measures being lifted in the coming days. The authorities in Wales made it clear they felt the same way.

That reflected their worries that, without a clear pledge to continue the restrictions, Britons would take them less seriously over the Easter holiday weekend. But while there was a consensus that it was too soon to end the lockdown, there were growing calls for the government to clarify its approach.

Keir Starmer, the new leader of the opposition Labour Party, called on the government to publish its exit strategy, saying on Twitter: “I’m not calling for precise timings, but the strategy. This is incredibly difficult on people and we need to know that plans are in place, and what they are.”

There are at least four possible outcomes, said Devi Sridhar, the director of the global health governance program at Edinburgh University. They range from a coordinated global effort to close borders, which she said was highly unlikely, to intensive testing and contact tracing for people infected, which is more realistic.

“If we can actually test people and quarantine those who are carrying the virus, we could relax it for everyone else,” Dr. Sridhar said. “We could keep that person and their family home for two weeks.”

But the success of that approach would hinge on Britain vastly increasing its capacity for testing. The health secretary, Matt Hancock, set an ambitious target of carrying out 100,000 tests a day by the end of April. Britain, which got a slow start on testing, has fallen far short of those numbers.

Even within parts of the government, there appeared to be confusion about the duration of the lockdown. Employees responsible for processing passport applications were asked to return to work next week.

The deputy scientific adviser at the Home Office, Rupert Shute, said people were no more at risk in the workplace than at home or at the supermarket, according to a transcript of a conference call obtained by the BBC.

Mr. Shute also referred indirectly to “herd immunity” — a theory once advanced as part of the government’s strategy but now rarely mentioned. It holds that as many as four-fifths of the population will contract the virus and therefore develop natural immunity against it.

“We are working on the assessment that 80 percent of us, if we haven’t already, will get the virus,” he said. “We cannot hide away from it forever.”

On Thursday, however, the government’s chief scientific adviser, Sir Patrick Vallance, said that based on data from other countries, he believed that fewer than 10 percent of Britons had so far been infected.

The pressure to reopen the economy is immense. According to Britain’s National Institute of Economic and Social Research, the lockdown is triggering the largest contraction in economic activity since 1921. It projects that growth will decline by 5 percent in the first quarter of 2020, and by between 15 percent and 25 percent in the second quarter, if the restrictions continue.

“It’s a balance,” Jonathan Portes, a professor of economics and public policy at King’s College London, said of the decision. “You have to make sure that you have as much support for companies to keep them going.”

“But there will come a time when it will be too long for them,” he added. “My instinct is that about three months is a plausible limit at which you start doing a lot of permanent damage.”