With the U.S. now leading the world in Covid-19 cases, its health care system fraying and economy faltering, some Americans abroad see their country in an unsettling light. 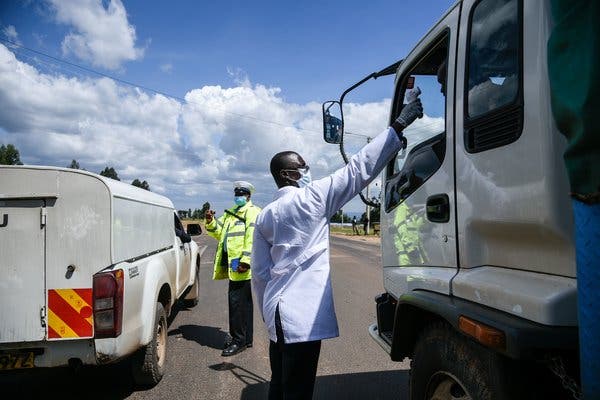 Taking the temperature of drivers and passengers in Nakuru, Kenya, to detect those with coronavirus symptoms.Credit…Suleiman Mbatiah/Agence France-Presse — Getty Images

Mask shortages in hospitals. Inadequate coronavirus testing. Medical supplies flown in from overseas. And an international charity setting up a field hospital in Central Park.

John Shaw watched from afar what was going on back home in the United States and decided to stay put, in Kenya.

“Africa just felt better,” said Mr. Shaw, a 38-year-old American who has lived for two years in Nairobi with his wife and two sons. “There are a lot of unknowns in terms of how Americans will deal with this crisis. It didn’t feel obvious to us at all that it will go well there.”

As the pandemic spreads and the number of infections rises across the world, many Americans working or studying abroad have returned home. U.S. embassies organized evacuation flights for Americans seeking to flee countries that have long been criticized for shabby health care systems and government misinformation.

But with the United States now leading the world in Covid-19 cases, its health care system fraying and economy faltering, some American citizens — especially those living abroad — are starting to see their country in a new, unsettling light.

As a result, a subset of Americans has opted to stay in Africa, which was among the places that President Trump notably described with a disparaging and vulgar epithet in a White House meeting.

Ousmane Sène, director of the West African Research Center in Dakar, Senegal, remembers President Trump’s remark, and considered it again in this crisis moment: “I’m sure right now he must be regretting what he said.”

Mr. Sène, who also is a professor of American culture at Dakar’s Cheikh Anta Diop University, said that in Wolof, the most widely spoken language in Senegal, there is a saying that translates to “prevention is better than cure” — a philosophy that now is far too late for much of America fighting the coronavirus.

“We wish this would not have blown up,” he said.

African nations, of course, are no less vulnerable than any other country to the virus — and, in fact, in many ways are far more so. As nations around the world compete for limited medical supplies to battle the pandemic, wealthier ones are elbowing aside poorer ones. That leaves much of Africa and Latin America out of luck.

Even in the best of times, the health systems in many African nations struggle with lack of supplies — including ventilators — making them susceptible to being overwhelmed in a large outbreak.

For now, in many parts of Africa, from areas that are international travel hubs to those that are more isolated, the coronavirus has been slow to take hold. But the number of confirmed cases and deaths is climbing, raising fears about the continent’s readiness to deal with a pandemic.

With huge populations of vulnerable citizens, experts say the impact could be devastating. Some nations have sealed borders to commercial flights to try to limit the spread of the virus.

China, Russia, Cuba and even Somalia are sending doctors and supplies to Western nations suffering from the pandemic. Some researchers say that African migrants who risked their lives to sail to European countries in search of a better life are now, with rising infections there, returning home.

“With this coronavirus, everything is upside down,” said Boubacar Boris Diop, a Senegalese author and screenwriter.

In conversations, Americans based in various African countries — to work for governments, aid groups or businesses — gave a variety of reasons for staying put, even if they had the means to leave.

Some Americans worried about being exposed to the virus in transit. Some would have no health insurance if they return to the United States, and know that their relative wealth abroad means they can afford the best care available in Africa. Some have shops, restaurants and other kinds of companies they want to monitor, even if those businesses are closed or not fully functioning amid lockdowns, curfews and shelter-in-place orders that various governments have issued. Some are staying because family members are not U.S. citizens and don’t have travel visas.

Others, like Mr. Shaw in Kenya, think African countries may be better positioned to weather a pandemic than the United States. A handful of African nations have lived through deadly modern-day outbreaks, like Ebola.

“Life can be challenging in Africa, but people are used to dealing with complex circumstances,” said Mr. Shaw, chief executive of a solar power company, who also lived for five years in the Democratic Republic of Congo. “In the United States, the economy is so high-functioning and everything is so intertwined that these disruptions are cataclysmic.”

Some African leaders appear to be using the distraction of an outbreak to try to seize more power.

Alpha Condé, the octogenarian president of Guinea, pushed through a referendum that could pave the way to another term. Uganda, where gay sex is punishable by a life sentence, has used new rules about containing the spread of infections to arrest gay citizens. In Kenya and elsewhere, the police have resorted to violent crackdowns as they enforce stay-at-home orders.

In Senegal, schools have been closed for more than two weeks and a nightly curfew is in place. The government has been conducting testing for coronavirus for weeks. Food is available on supermarket shelves, and a number of smaller vendors remain open. Hand sanitizer is in stock, for those who can afford it. So is toilet paper.

Senegal’s preparations were a comfort to Roxi Shryock, 33, who grew up in Illinois and has lived in Senegal for nearly four years. She had been debating whether to return to the United States, but said she found it difficult to get an accurate picture from afar of what was really happening there.

“There were so many people saying different things on social media that it’s scary,” said Ms. Shryock, who lives with her Senegalese husband and their baby in Dakar, the capital.

Ms. Shryock knew many Americans who have left Dakar in recent days. She considered trying to board what may be one of the last flights the embassy was organizing. But her husband does not have an American visa and she worried about splitting up her family for a long period of time. She operates two restaurants, and even though both are closed she didn’t want to abandon them.

However, she is concerned about becoming ill in Dakar, where she has had both good and bad experiences with the health care system.

“Being sick here terrifies me, but I don’t feel like there’s anything better, even in America right now,” Ms. Shryock said. “I’m sure it’s more sanitary in America, and there are more doctors than here. But they are running out of equipment there. We feel safe here and don’t feel scared here — not yet anyway.”

Ajara Bomah, 40, was living in Sierra Leone in 2014 when the Ebola epidemic broke out, and said the experience had helped the public prepare for coronavirus. Even though the first Covid-19 case was reported in Sierra Leone just at the end of March, the government has for weeks been running ads on television, radio and on social media urging citizens to wash hands frequently. Many schools closed at the end of the month.

“People remember Ebola like it was yesterday, and it triggers this readiness,” she said.

Ms. Bomah, who grew up in Massachusetts and has lived in Sierra Leone for a decade, left for several months during the Ebola outbreak because she was pregnant and worried about her delivery. But for now she has decided to stay in Freetown, the capital, where she lives with her 5-year-old daughter, after reviewing advice from the Centers for Disease Control and Prevention and the World Health Organization.

“The information I was getting was that it was better to just stay put and stay safe,” she said.

Heather Mason, 45, who writes for a travel website and operates a travel blog in Johannesburg, where she has lived for a decade, said that by the time she realized the outbreak was so serious, it seemed too high a risk of infection to travel through crowded airports and on long flights back to the United States.

She worries about the vulnerable in Johannesburg, which is on a strict lockdown. Stores are sold out of a few food items, but shortages don’t seem critical. A tailor in her neighborhood is sewing masks in brightly colored fabric. She is concerned about health care in Johannesburg, but she also thinks often of her parents in the United States, who are both in their 70s and more at risk if they get sick.

“South Africa’s health care system is not as robust as America’s health system. If we had the number of cases that are happening now in America, the system would be overrun,” said Ms. Mason who lives alone with her two cats. “I am scared about that, but I’m just as afraid for my family in America right now.”