500 Years Ago, This Port Linked East to West. Its Fate Was to Fade Away. – HumanRelations.org

Malacca gave birth to the notion of Asian Fusion centuries before it became a culinary trope. Its decline speaks to the promise and perils of globalization. 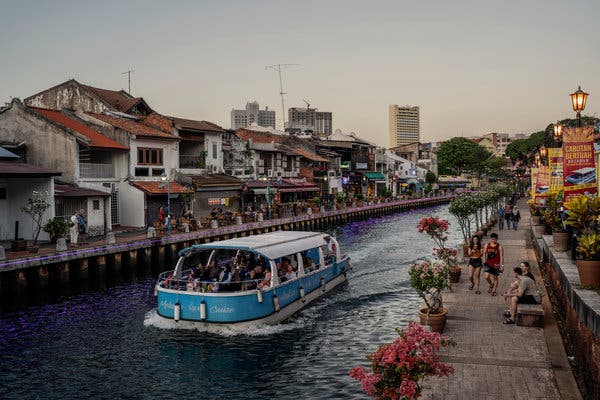 A tourist boat in the old part of Malacca, Malaysia, in February.

MALACCA, Malaysia — About the fastest moving force these days in the old Portuguese Settlement of Malacca is the sweat trickling down the torsos of the underemployed.

In the stifling heat — it’s always hot in Malacca — a group of such shirtless men were sprawled under the shade of a tree, hoping to catch the slightest sea breeze, but the winds weren’t cooperating. A few nearby dinghies had no oars, but it didn’t matter. The fish weren’t biting anyway.

This place wasn’t always so lethargic. In fact, in the 16th century, this port on the strategic Malacca Strait was positioned at the fulcrum of the world, linking the Pacific and Indian Oceans at the height of the global spice trade.

Centuries before Asian Fusion became a culinary trope, Malacca developed its own intricately multicultural heritage, influenced by the crowds of Chinese, Arabs, Indians, Persians, Turks, Portuguese, Dutch and Siamese, along with the local Malays, who all did business in its shops, ate in its food stalls and fell in love on its streets.

As the world pulls up its drawbridges during a time of pandemic and questions the merits of globalization, Malacca is a reminder that such transoceanic exchange has a long history of bringing both promise and peril.

And the city’s ultimate fate may serve as a warning that the prosperity globalization bestows on some can be fickle and fleeting. A city that once stood at the global crossroads can devolve into a backwater, and a once-thriving culture can face extinction.

Malacca’s port, once one of the richest on earth, silted up, and the city became a historical footnote. The spices that drove the age of exploration — nutmeg, cloves and mace — now molder in dusty cabinets, no longer treasured commodities.

And yes, a contagion struck, too, a plague that weakened the Portuguese hold on the city, paving the way for the Dutch and then the British, who favored other entrepôts and left Malacca to its slow decline.

Evidence of Malacca’s richly diverse past remains in its historical buildings, which lure tourists who are transported around town in disco-lit pedicabs.

On what is known as Harmony Street stands a Chinese Buddhist temple built in the 17th century, a Hindu temple from the 18th, and one of Malaysia’s oldest mosques, which boasts Chinese eaves, Portuguese tiles, Corinthian columns and a Victorian chandelier.

But one legacy of Malacca’s crossroads culture is struggling to survive in the 21st century: its Indigenous population of Eurasians, known as the Kristang, in reference to their Roman Catholic faith.

They prospered during the port’s golden age as civil servants, fishermen, traders and musicians. But the Kristang culture faces enormous stresses in modern-day Malaysia, which is fracturing along ethnic fault lines.

The Kristang language, a Portuguese creole, is facing extinction. Roman Catholic churches are emptying. Malaysian law all but requires Kristang who marry members of the ethnic Malay majority to convert to Islam.

“Our community brought East and West together,” said Darian Tan, 35, a Kristang digital marketer and the lead guitarist of a band made up of fellow Eurasians. “But now when everything is supposedly globalized, we’re in danger of dying out.”

In late February, Malaysia’s only truly multiethnic government since the country achieved independence fell after just two years in power. A coalition dominated by Malay nationalists took its place, casting aside reformist ethnic Chinese and Indians. One minority member of the new government is an Islamic party that has pushed for the country to become an Islamic state.

For Malacca’s multiethnic population, the return to populist Malay politics is provoking anxiety. Already, waves of ethnic Chinese Malaysians have emigrated as race-based quotas have limited their access to universities and the civil service. Many Kristang now live in Australia, Canada and Singapore.

About 1,200 Kristang still live in the Portuguese Settlement area of Malacca, a part of the city that attracts few tourists.

The settlement’s seafront faces a reclamation site for a vast Chinese-funded project called Melaka Gateway, which critics say is being used to strengthen Beijing’s grip on a geopolitically vital maritime choke point.

All the sand that has been moved around for the project has upended cockles and disrupted migration patterns for pomfret and shrimp — a devastating blow for Kristang fishermen, who have seen their ranks decrease by half over the past couple of decades.

“We’re not against development, but we are against something that is destroying a unique 500-year-old community,” said Martin Theseira, a Kristang local councilor who used to fish and make his own preserved seafood.

The Portuguese Square at the heart of the settlement is not a square at all. Instead, it is mostly a parking lot with a few restaurants selling Portuguese-inflected seafood. Tinsel garlands left over from Christmas decorate some of their sun-baked signs.

During the heat of the day, Malay youth come to joy ride on the concrete expanse, tracing doughnuts with their air-conditioned sports cars. The Kristang shake their heads but there is nothing they can do.

Near the entrance to the Portuguese Square is a statue of Jesus Christ the Redeemer, like the one in Rio de Janeiro. For years, the statue in Malacca lacked a head because conservative Muslims deemed it an idolatrous perversion. The figure was recapitated in 2017 but is still missing the proper permits. Kristang community organizers fear the statue could be destroyed if local officials give in to religious conservatives.

Behind the shade tree where Kristang men gather is the empty hulk of a building that was originally conceived of as the Lisbon Hotel. Tourists, the Kristang hoped, would flock there to revel in the community’s many festivals. But management of the hotel fell into Malay hands. Alcohol was frowned upon and unmarried couples were discouraged from reserving rooms.

“We love our festivals,” said Mr. Theseira, the local politician. “What’s a festival without wine and dancing?”

The Kristang language fuses an archaic Portuguese with Malay grammar. Philomena Singho teaches it on Facebook, through videos she films in her crucifix-decorated living room in the Portuguese Settlement. She is fluent in Papía Kristang but concedes that only a couple of thousand others speak the language with true proficiency. Even fewer are passing on the language to their children.

“I’m trying my best, but I’m worried that in one generation it could be almost gone,” she said.

Ms. Singho said she has Portuguese, Armenian, Dutch, Malay and Sri Lankan bloodlines. There are a couple of other ethnicities, too, she said.

The Kristang owe their existence to the initial Portuguese tradition of not sending women out to their colonies. Instead, men were encouraged through tax breaks and other incentives to pair with local women. (Other imperial powers, like the British, would discourage such mixed marriages, prizing racial purity.)

In Goa, Portugal’s first territorial possession in Asia, as well as other Portuguese outposts like Macau on the Chinese coast, Eurasian communities thrived.

Their cuisines were enriched by colonial crosscurrents, so that a chili-slathered chicken from Mozambique, another Portuguese colony, evolved into a popular Macanese dish seasoned with soy sauce.

In Malacca, a wine-rich braise that was a favorite in Lisbon was refracted as devil curry, a fiercely spicy stew traditionally made with Christmas meats and vinegar.

Today, in Malaysia, the Kristang are known mostly for their curries and sweetmeats or for their guitar-playing troubadours — a once-vibrant community diminished to cultural clichés.

“If we’re going to survive another 500 years,” Mr. Theseira said, “it can’t just be singing and dancing and eating.”